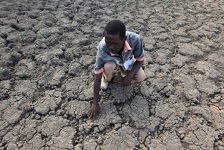 ZIMBABWE – Zimbabwe, this year, faces the worst drought in recent years with devastating effects threatening the livelihood of millions.

AS we entered into the year 2016, exactly seven weeks ago, the country reverberated with messages of a prosperous and stable Zimbabwe coming. Walter Magaya of Prophetic Healing and Deliverance ministries prophesied, for the umpteenth time, that the New Year was to become the harbinger of great things to come.

God said to me, 2016 is the year of overflow and abundance, Magaya told multitudes of his followers gathered at his Waterfalls Church in Harare, prompting them to break into song and dance. Magaya said before he made the declaration about 2016, he had spent the greater part of December interceding and seeking God’s plans.

He travelled to Nigeria for confirmation of his prophecy. He even went a step further in reinforcing his prophecy by mentioning that renowned Nigerian preacher TB Joshua had affirmed his prophecy. I went to ask my spiritual father and he confirmed this. Yes, I know we are going through tough times as a country, but this year, it is a year of overflow. I asked him [TB Joshua], my father, this is what the Lord is telling me, but look at our situation as a country, as Africa, is this true? He said it is true.

Strange, isn’t it that one would seek to verify a message supposedly coming from God with another mortal being? But knowing that a 2014 survey showed that Zimbabweans make the largest number of nationals flocking to the West African preacher’s citadel, this surely would give credence to the prophecy and it did. Newspaper pages bristled with the headlines; I recall particularly one which screamed, TB Joshua confirms Zimbabwean prosperity prophecy.

Now, it must be clear that Emmanuel Makandiwa has been at the forefront, year in, year out, for the past six years prophesying economic boom for Zimbabweans. The beginning of each New Year since 2010 when his ministry took off has been marked by enchanting prosperity prophecies. The man once mentioned that gold will be picked from the ground in 2013 as he prophesied massive prosperity for the country. Recently, he made another comic prophecy that there were oil reserves underneath. The prophecy resulted in a skirmish with politician Professor Jonathan Moyo.

Now these are the most notable prophets in Zimbabwe whose prophecies rhymed. It would appear they also set the tone for the rest of the prophecies that would follow from up and coming prophets throughout the country. Of all these hair-perming prophets none has prophesied the everyday catastrophic realities we have witnessed in the country in the last five years.

Zimbabwe this year faces the worst drought in recent years with devastating effects threatening the livelihoods of millions. Â None of all the prophecies thrown forward picked such a momentous disaster but they all saw prosperity. The prophets continue to sing from the same erroneous hymn book. They have continued to fail dismally in their apparent guess work disguised as prophecy.

One other noteworthy point as many other people have pointed out is that these new age prophets thrive on saying sugary things that caress the ears of listeners. They have to maintain hope at all cost and by all means, fair or foul. As a result, we heard the echo of the same prophecy from the minor prophets who seemed to be parroting the words of the major prophets.

However, reality on the ground has been the greatest betrayer of these prosperity merchants. Zimbabwe is far from the prophesied country that would attain the huge prosperity as we have heard in the past few years. If anything the country’s political and economic fortunes could not be any worse at this time and evidently in the future. As things stand the factional fights characterizing the political landscape threaten the stability of the country.

One would immensely wonder how neither of the numerous prophets in this country failed to foresee the cruel El Nino facing the country today. How these prophets missed the drought threatening livelihoods of thousands in the rural area defies the mind. The country may soon face sugar shortages and inflation rose last week yet none saw all these undesirables and God showed them the economy flourishing.

Harare currently is groaning as excavators continue to raze built houses to the ground and nursing mothers have to brave the harsh weather. Could this be prosperity by another name? The last year July ruling which threw over 20,000 bread winners in the streets has caused a fresh exodus to hostile foreign lands while we continue being bombarded with these patently false prophecies.

It remains unfortunate that caught between a hard place and a rock, hopeless Zimbabweans would rather cling to the hope of a never coming prosperity.

ZIMBABWE - Zimbabwe, this year, faces the worst drought in recent years with devastating effects threatening the livelihood of millions. AS we entered into the year 2016, exactly seven weeks ago, the country reverberated with messages of a prosperous and s...
Share via
x
More Information