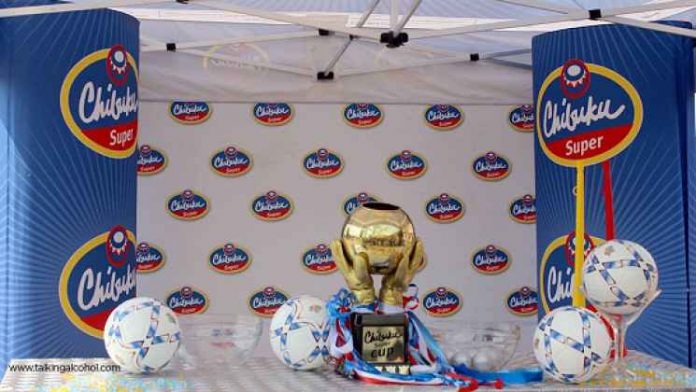 ZVISHAVANE – Dazzling FC Platinum were crowned the Chibuku Super Cup Champions after beating Ngezi Platinum 5-3 on penalties at Mandava Stadium in Zvishavane yesterday. The pulsating encounter ended 0-0 after extra-time, and needed the lottery to separate the teams.

Marvelous Mukamba was the fall guy for the Ngezi Platinum after his weak penalty was saved by goalie Petros Mhari, while his teammates Qadr Amini, Keith Murera and Denver Mukamba converted for the Mhondoro-Ngezi-based side.

With the trophy in the bag, the Zvishavane platinum miners pocketed US$75 000, a trophy plus a ticket to the next Caf Confederations Cup edition.

For Norman Mapeza, there was the reassuring familiarity of a comfortable win over Ngezi Platinum Stars and yet another milestone for him as an individual in charge of Pure Platinum Play.

“This was a team effort and I thought we could have won the match a bit earlier than the penalties.

“They always give us a good run for our money. We expected a tough match and they gave us a tough match,” he said.

“You know, penalties are anyone’s match and when we finished the extra-time, I was uneasy because the boys have hardly been effective on penalties, but I am very happy that today we managed to win. Mhari did well to save that penalty, that was enough to gain us a win.

“What makes this more enjoyable is that we were playing in our home ground and we got the result we needed. Hard luck to Ngezi, they have done very well to be here and I think they will come up stronger.”

This is FC Platinum’s second Chibuku Super Cup title, having won the 2014 edition with Mapeza in-charge.

For Rodwell Dhlakama, this was only another sobering reality that little has changed since the 2019 Chibuku Super Cup edition when they lost to Highlanders in the final, albeit under controversial circumstances.

“We shift focus to the league, but it is not easy to lose two finals in succession. We needed to win this one, at least to show that we are moving in a positive direction,” the Ngezi Platinum mentor said.

“We tried hard in open play and going to the penalties, it becomes anyone’s game. I won’t blame Marvelous (Mukumba) for the miss, we lost as a team and we move as a team.

“No one should be blamed alone, because after all, we reached this stage as a team and we accept the result we got as a team.”

That they brought eight buses of supporters to cheer them was enough to show their conviction and confidence.

However it was not to be.

And yet when Dhlakama re-watches the game, he will probably be compelled to question his own role and ask himself if he was guilty of lack of courage or naivety, having kept the menacing Mukamba on the bench, only to throw him into the fray in the second half.

His men, though, fought hard and did reasonably well.

However, it was FC Platinum who were controlling the ball, but not doing much with it.

Brian Banda got their first chance of the game after five minutes, but his effort went over the bar.

Prior to that, Ngezi’s Valentine Kadonzvo had been set up by Bruno Mtigo in the area.

However, his attempt to lift a through-ball was thwarted easily by Gift Bello.

Personnel-wise, the Mhondoro club was unrecognisable in the first stanza, at least until the introduction of the dazzling Mukamba and MacDonald Makuwe after the half-time break.

Mukamba looked composed and threatening even before forcing Mhari’s first real save on 77 minutes.

He whipped in a cross that was destined for Makuwe, who was prepared to pull the trigger from inside the box, but goalie Mhari was equal to the task.

Although looking reasonably organised at that stage, Ngezi Platinum lacked a sustained attacking threat, with their hopes pinned on Mtigo’s counterattacks.

FC Platinum almost paid the price before the end of regulation time when Donald Dzvinyai was dispossessed by Mtigo, whose cross needed the timely intervention from Bello to clear the danger for the home side.

Ngezi Platinun’s recent results show they are good enough to win any silverware in the top-flight, but the gulf between them and their platinum cousins is still yawning.

ZVISHAVANE - Dazzling FC Platinum were crowned the Chibuku Super Cup Champions after beating Ngezi Platinum 5-3 on penalties at Mandava Stadium in Zvishavane yesterday. The pulsating encounter ended 0-0 after extra-time, and needed the lottery to separate ...
Share via
x
More Information