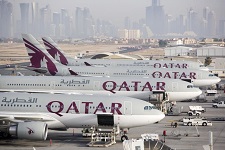 ZIMBABWE – One of the largest Asian airlines, Qatar Airways, is set to launch flights to Zimbabwe soon amid indications negotiations with Government were at an advanced stage.

Qatar’s ambassador to Zimbabwe, Salem Al-Jaber, said this after paying a courtesy call together with a business delegation from his country on Acting President Emmerson Mnangagwa at his Munhumutapa Offices yesterday.

“Qatar Airways will soon start flights to Harare and Victoria Falls and discussions are on-going and now at an advanced stage,” Al-Jaber said.

Qatar Airways flies to over 150 destinations globally with its fleet of over 150 aeroplanes.

The coming in of Qatar Airways will be a fillip to the country’s efforts to revive tourism industry that took a knock due to negative publicity that accompanied the country’s land reforms at the turm of century which saw a number of major airlines pulling out of Zimbabwe.

Al-Jaber said they also discussed investment opportunities in the country and said they were interested in venturing into mining, agriculture and real estate development.

“We also discussed ways of doing business in Zimbabwe, especially in areas that include agriculture, mining and real estate development,” he said adding that in mining they were interested in minerals such as diamond, gold and copper.

Earlier on Acting President Mnangagwa met with the new Chinese ambassador to Zimbabwe, Huang Ping who also pledged to strengthen cooperation between the two countries.

“We discussed so many things that we can do together to expand our areas of cooperation especially in the agricultural sector, mining and infrastructure development,” he said.

Outgoing US ambassador to Zimbabwe Bruce Wharton also paid a courtesy call on the Acting President to bid him farewell.

He said relations between the two countries had improved during his tour of duty.

“We had a very positive discussion and we both agreed that we have made progress in the past three years and that there is more we can do,” he said.

Wharton commended the country for adopting a homegrown constitution, adding that emphasis should be put on improving the investment climate.

On the illegal sanctions the US imposed on Zimbabwe, Wharton said both countries had a role to play if they were to be removed.

However, he said a final decision to remove them lay with the US Congress and the president.

ZIMBABWE - One of the largest Asian airlines, Qatar Airways, is set to launch flights to Zimbabwe soon amid indications negotiations with Government were at an advanced stage. Qatar’s ambassador to Zimbabwe, Salem Al-Jaber, said this after paying a court...
Share via
x
More Information
x