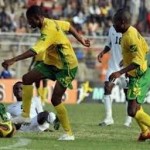 THE Warriors thumped the Flames of Malawi 4-1 in an international friendly encounter at Kamuzu Stadium in Blantyre on Wednesday afternoon as they began their Afcon 2015 qualifiers preparations.

Peter Moyo opened the scoring for the visitors for his first goal in Warriors colours after 20 minutes of play before Atusaye Nyondo ensured parity with a sliced header in the 50th minute that went beyond the reach of goalkeeper Washington Arubi.

But Kudakwashe Mahachi connected with a half volley from a Knowledge Musona cross to restore Zimbabwe’s lead.

Kingston Nkhata then broke through to make it 3-1 before tapping in a Mahachi cutback from the by-line at the second attempt to make it 4-1.

Meanwhile, former Highlanders striker and Warriors fringe player Obadiah Tarumbwa has become the fourth Zimbabweans player in less than a year to find the going tough after being offloaded by his Absa Premier Soccer League side Pretoria University.

He is reportedly on his way to re-unite with Bantu Rovers as free agent.

Tarumbwa joins the Dynamos trio of Simba Sithole (Supersport United and Mamelodi Sundowns), Tafadzwa Rusike, formerly of Ajax Cape Town and Oscar Machapa from Moroka Swallows who have had to retrace their steps in a bid to revive their careers.

In fact, two other former Dynamos players Denver Mukamba and Rodreck Mutuma, who left the country amid a frenzied media blitz, are struggling at their respective clubs Bidvest Wits and Bloemfontein Celtic and have been linked with returns to the Zimbabwe champions.

Tarumbwa signed for Pretoria from Sofapaka of Kenya in July last year on a three-year deal but the striker failed to live up to the expectations.

AmaTuks coach Steve Barker was diplomatic in his response on showing Tarumbwa the door, telling Chronicle Sport that they reached “a mutual agreement” to terminate the player’s contract.

“We reached a mutual agreement with the player as we thought it was going to make everybody happy,” said Barker.

“The Zimbabwean player was always good, disciplined and focused but what happened to him not to contribute immensely and score goals for the team can happen to anyone. I wish him great success even though he never fulfilled his goals with the team.”

While Bantu Rovers general manager Wilbert Sibanda seemed shocked about the leak of the story, he admitted that Tarumbwa could add value to their side which bought the Plumtree Chiefs franchise last week and are returning to the Premiership.

“He might add value to the squad. He is a good player and if we manage to get him that will be great,” Sibanda said.

THE Warriors thumped the Flames of Malawi 4-1 in an international friendly encounter at Kamuzu Stadium in Blantyre on Wednesday afternoon as they began their Afcon 2015 qualifiers preparations. Peter Moyo opened the scoring for the visitors for his first g...
Share via
x
More Information
x