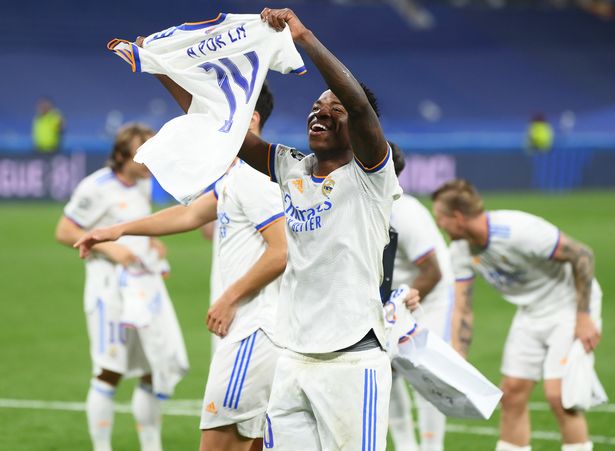 MADRID – Karim Benzema scored an extra-time penalty as  Real Madrid pulled off another astonishing comeback in the Champions League to stun Manchester City 3-1 on Wednesday and book a showdown with Liverpool in the final. City looked certain to go through when Riyad Mahrez  put them 1-0 up and 5-3 ahead on aggregate but Rodygo, on as a substitute, scored an incredible late double, his goals in the 90th and 91st minutes sending the tie to extra time.

City failed to really put their hosts under pressure for the remainder of extra-time as Carlo Ancelotti’s side held on to seal their place in Paris for the final on May 28. The full-time whistle eventually went and marked yet another failure in Europe for Guardiola and his City tenure.

After the game once victory was secured, the Real Madrid players all donned special versions of their home strip personalised with the words “‘All out for” above the number 14. The shirt is in reference to the fact that Los Blancos currently have 13 Champions League titles in their trophy cabinet and now have the chance to add to that tally.

This is not the first time the European titans have done this kind of gesture, with all the players wearing shirts that also read “All out for” above the number 13 before the 2018 final in Kiev against Jurgen Klopp’s Reds. The photos sparked outrage among the Liverpool fanbase – many of whom described the stunt as disrespectful. However, they stuck to their word and delivered on the message by toppling Liverpool 3-1 in the final four years ago. They will take on a drastically different Reds side in the French capital this month – one currently hoping the final will present the chance to cap off a historic quadruple.

The Reds have already sent a message of their own in the direction of Madrid, with Liverpool talisman Mohamed Salah taking to Instagram to remind fans of the previous heartache suffered at the hands of Los Blancos.

The Egyptian uploaded a picture of him celebrating alongside Fabinho accompanied by a caption that read: “We have a score to settle.” That update alongside Real Madrid’s over the top celebrations at full time leave the final balanced nicely for a fiercely contested affair.

MADRID - Karim Benzema scored an extra-time penalty as  Real Madrid pulled off another astonishing comeback in the Champions League to stun Manchester City 3-1 on Wednesday and book a showdown with Liverpool in the final. City looked certain to go thr...
Share via
x
More Information