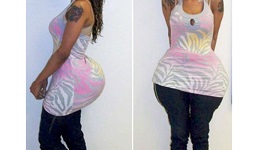 ZIMBABWE – Several women in the country, eager to enhance their looks, have turned to Apetito tablets, illegal injections and chicken-fattening pills in pursuit of the ideal “hourglass” figure that society has deemed the standard of beauty.

The unregistered medicines are smuggled into the country from India, Mozambique, Nigeria, South Africa and Zambia.

The Zimbabwe Revenue Authority (Zimra) says an increase in seized contraband of butt-fattening pills shows extensive circulation of such drugs in the country.

Last year, alert Zimra officials stationed at Chirundu Border Post confiscated a huge consignment of skin-lightening creams and butt-enhancing tablets, which were carefully stashed in a well-carved opening on the trailer of a haulage truck headed for Harare.

“Skin lightening creams and ‘body-building’ tablets — favourites among local females — have flooded the streets of Harare and other towns, with vendors, who are ready to sell them to unsuspecting customers, playing cat-and-mouse games with members of the Zimbabwe Republic Police and Municipal Police on a regular basis,” Zimra said in a report.

In Harare, for instance, illegal injections and drugs are sold in the streets and at Mupedzanhamo Flea Market in Mbare, Nobby Chimwaza, a vendor said.
“I sell physical stature enhancement tablets such as Apetito as well as butt-enhancing injections to make a living. These pills produce different results and they sell like hot cakes,” he said.

“One takes these pills until he or she gets the desired body shape. They also enhance one’s appetite.”

Hilda Matambo, a Harare resident, said the tablets were popular among women with low self-esteem.

“Only women with low self-esteem are likely to change their butt size and skin tone. Most of them sacrifice the little they have to enhance their buttocks and breasts,” she said.

Waist trainers’ trader, Wadzi Mutezo of Alter Ego Clothing, concurred, saying it had to do with improving the self-image of a woman.

“A lot of women suffer from image issues and corseting is the one thing they can do to boost their confidence instantly. The world we live in reminds us every day that you need to dress and look a certain way to be considered beautiful,” she said.

Stella Pumhu, a fashion designer, believes average adolescent women in most African countries consider a “big booty” an asset and “bootylicious” celebrities like Kim Kardashian, Coco Austin and Nicki Minaj are held up as true models of beauty.

Anoziva Marindire, a journalist and gender activist, points to the power of the media, as she said curvy and light-skinned women are stereotyped and portrayed as very attractive in movies and fashion magazines.

She said hips and butts of famous African celebrities “motivate some women to acquire big buttocks by any means”.

Marindire said this was motivated by the attention women often sought from men and a big butt is considered an attention grabber.

“There is a general assumption that Zimbabwean men love women with big buttocks. Because of this and other reasons, women with low self-esteem will go to any length to get that desirable butt,” she said.

“Curvy women are said to drive men crazy and most African men are hypnotised by a bouncing backside,” she said.

Egnes Dube, a member of the Team Bluffhill women fitness training group, admitted that although some women think men were attracted by slimmer women, the opposite was often true.

“Some women think men love slim women, but this is Africa, Zimbabwe. Big is beautiful and healthy, and as we are learning, big is actually more beautiful,” she said.

Top music and modelling promoter Barbra Chikosi — popularly known as Mai Red Rose — averred that African women were curvaceous by nature and that often led others to pursue a similar figure.

“African men widely accept curvy and fairer women as the most beautiful and ideal for marriage. Therefore, women are doing this to attract the opposite sex because men have the tendency of making advances at curvaceous women,” he said.

Several men interviewed said they preferred fuller women and for that reason, women are taking a high risk to enhance their looks, but some women insisted they simply wanted to look beautiful and not to seek men’s attention.

“The logic behind the move was not to lure men, but to enhance my appearance. It is my body and I do whatever I want with it,” one woman said.

Health practitioner Vimbainashe Changwara said although pop culture tried to package butt-fattening as the in-thing, the trend has left many black women with abnormally rotund derrières.

“Most women in Zimbabwe, to be specific, cannot afford surgical enhancements. They are, therefore, forced to use illegal pills or tablets and chicken-fattening injections to enhance their looks,” she said.

“These home-butt injections are given by people who are not certified plastic surgeons and as a result, they pose serious dangers to women.”

“People should desist from buying these drugs as a way of safeguarding their health. Some of the drugs could have gone past their expiry date,” he said.

An official from the Ministry of Health and Child Care said most of these tablets and injections were not registered and, therefore, contravened the Medicines and Allied Substances Control Act.

Zimbabwe set to sizzle at 45 °C

Reckless pursuit of 'beauty' at a high price

ZIMBABWE - Several women in the country, eager to enhance their looks, have turned to Apetito tablets, illegal injections and chicken-fattening pills in pursuit of the ideal “hourglass” figure that society has deemed the standard of beauty. The unregis...
Share via
x
More Information
x