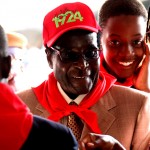 ZIMBABWE – President President Mugabe’s speech at the recent United Nations may have been the correct paper but it was definitely irrelevant to the plight of suffering Zimbabweans. He basically had three issues; gays, mass emigration and regime change.

Yes we are not gays but we have higher priorities like our collapsing economy. Yes there is a huge upsurge of refugees into Europe but are they not running away from dictators like him. Africa and Zimbabwe did not send Mugabe to take a swipe at Mr Obama but to push and plead for development and the respect for human rights. Regrettably President Mugabe has no moral authority to talk about development and human rights.

President Mugabe’s is mistaken that his outdated â€œrevolutionary slogans are still relevant in this e-generation. All his experiments on Zimbabwe have dismally failed; most notably his cooperatives, villagisation, and his violent land reform flops. Sadly, we have tolerated a life without water, electricity, functional sewer systems, jobs and food for too long.

Our problem is that we have been too fearful, too tolerant and, instead of resisting Mugabe’s mismanagement of our economy and contempt for human rights, we chose to look the other way while Mugabe did anything he pleased. Had we been vigilant we could have rallied behind heroes like Edgar Tekere and Margaret Dongo who first alerted us of this heartless dictator and the hopelessness of his lieutenants.

What President Mugabe must to know is that regime change is at the door. In 2018 the Gushungo Wall is coming down. Mugabe can threaten UN delegates but regime change is unstoppable. No human being can be subjected to hell like Mugabe has done to his fellow citizens. The purpose of elections is to change regimes and we will do it in 2018. This time we will not be intimidated or cheated. They may have stolen Itai Dzamara but they will not abduct us all.

Under the ZUNDE banner it’s now us – the poor victims pitted against those who are benefiting from this evil system destroying our country. It’s strange that we still have factions in Zanu PF fighting to maintain this evil system. They may be Amai Muhofisi, G40, Ngwena or Gamatox factions but all they are fighting for is to become the Chief Dictator and to protect their ill-gotten wealth. Regardless of any manifesto they may announce, there is no difference between a deputy dictator and the principal dictator.

Zimbabwe: South Africa negotiates with Zimbabwe over release of its cash

ZIMBABWE - President President Mugabe's speech at the recent United Nations may have been the correct paper but it was definitely irrelevant to the plight of suffering Zimbabweans. He basically had three issues; gays, mass emigration and regime change. Ye...
Share via
x
More Information
x