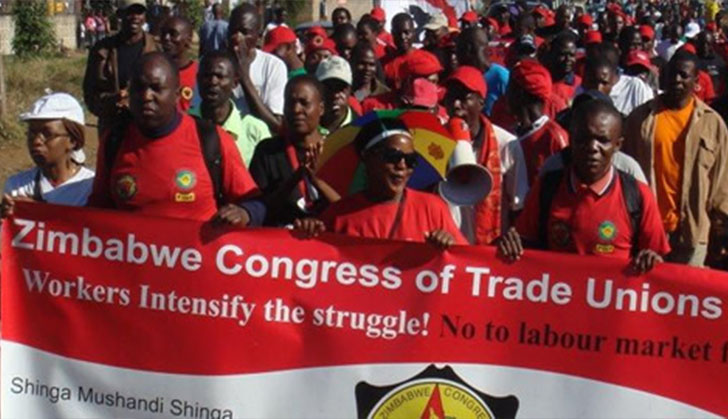 ZIMBABWE – The Zimbabwe Congress of Trade Unions (ZCTU) has called for a country wide general strike urging all workers to participate and fight for an end to the poor working conditions they face.

The trade union urged every worker to convene every Monday to discuss their plight and make their concerns heard.

Workers’ salaries has been reduced to unacceptable levels, as the Zimbabwean dollar continues to plummet.

“Our collective voice is our amoury so let us unite and fight this modern day slavery.

“Our minimum wage is now US$25, that means people are now working for 25 loaves of bread.”

“Every worker must earn their salaries in US Dollars as at August 2018…, Poverty must end. The government should embark on a Covid-19 response that is humane and inclusive where every worker in all sectors has access to Personal Protective Equipment (PPE) and the informal sector must be incorporated into this response to allow people to survive.

The workers said the suffering and poverty in the country was man made and a result of corruption, cartels and poor governance.

Meanwhile, teachers in Zimbabwe today celebrated World Teachers Day (WTD) by calling for intensified boycott of duty on the basis of incapacitation calling  heads to lock school gates until the government acceded to their demands

The Progressive Teacher’s Union of Zimbabwe (PTUZ) said the day was being commemorated at a point where many were mourning the demise of the profession.

“It is also a day the United Front of teacher unions are meeting Public Service Minister, Paul Mavima. It would be treasonous for any teacher to be found in any school because the Day must be declared a holiday recognising the pivotal role played by teachers just as the armed forces have their Defence forces day.

“Henceforth we urge all teachers to demonstrate their incapacitation by their absence from schools. The 40% awarded as COLA was a further insult to teachers and would further widen discrepancies between teachers’ salaries and other gvt workers as 40% of $3600 and 40% of $20000 are fundamentally different in quantum.

The teachers are demanding the following:-

Government has been at loggerheads with teachers after it announced the reopening of schools. It has been a week now and most teachers have not yet reported for duty after declaring incapacitation.

This year’s World Teacher’s Day theme is ‘Leading in Crisis, Reimagining the Future.’

... as teachers call for high incapacitation gear ZIMBABWE - The Zimbabwe Congress of Trade Unions (ZCTU) has called for a country wide general strike urging all workers to participate and fight for an end to the poor working conditions they face. The trad...
Share via
x
More Information