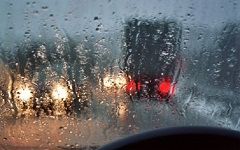 ZIMBABWE – After an intense heatwave, which developed following the first rain received on October 30, 2015, Mutare received (on November 18) the second and so far heaviest rainfall of the new season. Thirty six milimeters (1.42 inches) of rain fell. The beginning of the lunch-time downpour captured in this looped time-lapse movie was again preceded by the gathering of a dense swirling mass of dark cloud above Mutare which, after a short time, produced strong curtains of rain and at least three lightning bolts, one of which is shown striking the ground.

What is of particular interest is that on this occasion the clouds which produced heavy rain were rotating clockwise in contrast to anticlockwise as captured in my earlier first-rain video.

Another difference between the two storms was in the type of lightning produced. The first rainstorm was accompanied by almost continuous rumbles of thunder from frequent hidden cloud-to-cloud (negative?) discharges whereas on this occasion all of the lightning observed consisted of brief single unbranched (positive?) ground strikes which were followed by loud reports. It would appear that different mechanisms of lightning generation were in operation which could be related to the observed differences in movement of the parent clouds?

The original real-time “second rain” video, which runs for 4 minutes and 14 seconds, was taken using a tripod mounted Panasonic Lumix DMC TZ60 compact camera in sunset scene mode. The time lapse movie produced from it consists of 5 loops each containing 254 frames extracted at 1 second intervals. As each loop lasts 6.4 seconds, all motion has been speeded up 40 times.

The lightning strike, which occupies just one frame, had to be separately extracted and inserted in the correct position for it to appear.

ZIMBABWE - After an intense heatwave, which developed following the first rain received on October 30, 2015, Mutare received (on November 18) the second and so far heaviest rainfall of the new season. Thirty six milimeters (1.42 inches) of rain fell. The b...
Share via
x
More Information