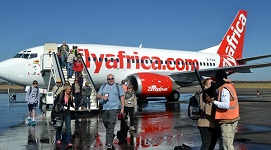 This comes after the low-cost airline’s operations were suspended last month after the company’s majority shareholder Chakanyuka Karase voluntarily submitted the carrier’s Airline Operator Certificate (AOC) to the Civil Aviation Authority of Zimbabwe (Caaz) over a boardroom dispute.

“In a welcome judgment issued by the Zimbabwe High Court on Tuesday, November 17, Fly Africa Zimbabwe won its legal case that found local partner Chakanyuka Karase had acted illegally and with malicious intent to damage the airline by seeking to ground Fly Africa Zimbabwe,” the company said.

The grounding of the carrier’s planes —which left over 2 000 passengers stranded — came after Caaz subsequently grounded the airline company 49 percent owned by Mauritius-based Fly Africa Limited.

“We have begun work on restarting the airline and are working with the regulators to resume flights on Tuesday, November 24. We will update everyone as soon as we have more information,” said Fly Africa.

This comes as Fly Africa group chief executive Adrian Hamilton-Manns recently told the businessdaily that the move by Karase was after “shareholder disputes” had affected the carrier’s customers.

“The interdict seeks to prohibit Karase from meddling in Fly Africa affairs, we have since commissioned a forensic audit into the affairs of the company as it emerged that Karase allowed his son Matipedza to steal at least $140 000,” Hamilton-Manns said.

The Fly Africa boss also said the group had since laid charges against Matipedza with the country’s Criminal Investigation Department.

“Karase Snr still feels he has claims to the company as the majority shareholder but we are in intense hardships and distressed that something like shareholder issues could drag the whole company into problems.

“In the meantime we have appointed Captain Mathias Munyaradzi as Karase’s permanent replacement,” he said.

On October 27, Karase was relieved of his duties at Fly Africa Zimbabwe in his capacity as chairman and chief executive.

Hamilton-Manns said his company was going to institute charges against Karase once the audit was completed.

The Fly Africa boss insisted that Karase had “unilaterally and illegally” submitted the licence to Caaz, an action that had cost the group in revenue.

The Karase family holds a 51 percent stake in Fly Africa Zimbabwe through its Fresh Air while Fly Africa Limited owns the remaining 49 percent.