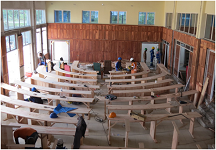 ZIMBABWE – The multi-million-dollar Robert Mugabe School of Education at Great Zimbabwe University in Masvingo Province, named after President Mugabe because of his passion to develop the country’s education system, is nearing completion with classes expected to start in August.

The unique school, that is being built in the Masvingo industrial area, will accommodate 5 000 students after completion of construction work in June this year.

Great Zimbabwe University Vice Chancellor Professor Rungano Zvobgo said among other outstanding features at the school will be the flighting of live lectures from eminent universities across the globe.

“The school will train students in every aspect of education. We are looking at drawing a large number of international students, something that we have been unable to do in the past because of constraints of space. We are building a unique school where live lectures will be flighted from other reputable institutions of higher learning across the globe,’’ he said.

‘’We named the school after President Mugabe because he is the father of our education system in this country. President Mugabe was also a teacher himself and, he has promoted education in Zimbabwe more than what has happened in any other country in Africa,” said Prof Zvobgo.