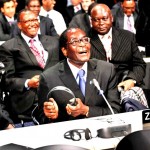 ZIMBABWE – Zimbabwean president Robert Mugabe deviated from his prepared speech at the UN general assembly to declare “we are not gays”, drawing some laughter and applause.

Ironically, the 91-year-old leader’s remarks came during a speech on human rights.

Respecting and upholding human rights is the obligation of all states, and is enshrined in the United Nations charter. Nowhere does the charter abrogate the right to some to sit in judgment over others, in carrying out this universal obligation. In that regard, we reject the politicisation of this important issue and the application of double standards to victimise those who dare think and act independently of the self-anointed prefects of our time.

We equally reject attempts to prescribe ‘new rights’ that are contrary to our values, norms, traditions, and beliefs. We are not gays! Cooperation and respect for each other will advance the cause of human rights worldwide. Confrontation, vilification, and double-standards will not.

“We are not gays” was not in the prepared remarks issued to journalists ahead of delivery and appears to have been ad-libbed by Mugabe, whose government has been accused of blatant human rights abuses. Male same-sex sexual activity is illegal in the country and LGBT activists face repeated crackdowns and abuse.

255 lawyers have their careers hanging on a thread