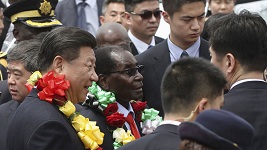 ZIMBABWE – After years of public outrage over the growing menace of corruption which has seen heads of state-owned enterprises pocketing more than $600 million in unauthorised salaries, President Robert Mugabe has named a new Zimbabwe Anti-Corruption Commission.

He also announced his intention to directly lead the fight on corruption by transferring the administration of the commission from the Ministry of Home Affairs to his department, the Office of the President and Cabinet.

Zimbabweans have watched with envy as fellow African states such as Kenya and Tanzania tackle corruption in a decisive manner. As Mugabe forges ever-closer ties with China, there have been widespread calls for him to adopt the Asian country’s no-nonsense approach to fighting graft which has seen culprits publicly humiliated, financially ruined or even executed.

Harare-based political commentator Davison Gomo says it is not necessary for Zimbabwe to mimic China. “We don’t need a Chinese model; we just need a Zimbabwean model. We have a president and a cabinet mandated with running this country. I don’t think we should just sit there and do nothing while some people drag the country down the drain,” said Gomo.

Surveys by Transparency International and polling agencies show that sceptical Zimbabweans are not holding their breath and have lost faith in politicians’ willingness to confront white-collar crime. The public accuses the governing Zanu-PF of looting state coffers while the opposition MDC-T plunders the local authorities it controls.

The anti-corruption commission, a constitutional body, has been operating without commissioners for the past two years, creating fertile ground for looters to run riot in a country where one top executive paid himself a monthly salary of $500 000 while the company slumped in debt.

Bogged down by political interference and blighted by allegations of receiving funding from questionable sources, the previous commission was virtually dysfunctional and failed to claim a high-profile scalp.

For the first time in Zimbabwe’s history the newly appointed commissioners were chosen from a list submitted by Parliament, following openly held interviews of candidates nominated by the public. This was in line with a national Constitution adopted in 2013.

The new commission is chaired by Job Whabira, a former secretary in the ministries of defence and home affairs. Denford Chirindo, the former chairperson, has been retained as an ordinary commissioner and the jury is still out as to whether he will enhance institutional memory or become a stumbling block.

Across the length and breadth of the country, there is near-unanimity that Mugabe’s poor commitment to the fight on corruption has become the biggest threat to his legacy.

Critics often describe the aged president as aloof, hands-off and detached from the lived experience of ordinary citizens who have to navigate public services teeming with corrupt officers demanding bribes at every turn. State-owned companies, which used to contribute 40 percent of gross domestic product, have been mismanaged and looted dry. Roads are full of potholes yet municipal officials pay themselves inflated salaries.

A month ago the Minister of Health and Child Care, Dr David Parirenyatwa, was caught in the eye of a storm when it was revealed that he drew $77 000 in suspicious circumstances from a health insurer funded by long-suffering civil servants. There were calls for his sacking, but he remains in his job.

Legal expert Alex Magaisa said it was such impunity that undermined the fight on corruption in the public eye.

Heads of 78 state-owned companies and the board members who were supposed to monitor them were accused of pocketing more than $600 million in a pay scandal dubbed “Salarygate” between 2009 and 2014. Newspapers and websites were awash with shocking details of the plunder, yet not a single official has been prosecuted.

In 2013 alone, the total wage bill for senior managers and the boards of parastatals was $133 million. This means that a well-connected clique of 3 000 officials was siphoning 3.5 percent of government expenditure in a country where the average citizen is surviving on $1.16 per day.

Chiri, in a hard-hitting report for the 2014 financial year, condemned 22 ministries for poor corporate governance, abuse of funds, and flouting tender procedures. The 22 ministries form two-thirds of all government departments. Due to a lack of maintaining proper accounting records $409 million could not be accounted for. Three state-owned companies were advanced $3.3 million in “loans” but there were no loan agreements to support the transaction. Brand new vehicles, diesel, expensive equipment and other assets disappear without trace.

The government has since formulated a Corporate Governance and Remuneration Policy Framework which has limited the highest salary to $6 000. Implementation of the new rules is lethargic, however, amid reports that some officials are still enjoying fat-cat perks.

Economic commentators note that Zimbabwe’s annual budget has remained stuck at $4 billion for the past six years. Zimbabwe boasts the second largest platinum deposits in the world, rich gold reefs, world-leading chromium ore, diamonds, coal and more than 60 other minerals. The economic collapse can largely be attributed to massive corruption, analysts say.

Mugabe hosted Chinese President Xi Jinping on Tuesday and Wednesday. In the aftermath of that historic visit, the big debate in Zimbabwe is centred on whether the Zimbabwean leader can – in the words of his Asian counterpart – tackle “the tigers and the flies”, high-level and low-level crooks who loot public funds with impunity. – African Independent

Robert Mugabe was here.. and now the Pope? We are blessed- Shaniqwa

ZIMBABWE - After years of public outrage over the growing menace of corruption which has seen heads of state-owned enterprises pocketing more than $600 million in unauthorised salaries, President Robert Mugabe has named a new Zimbabwe Anti-Corruption Commi...
Share via
x
More Information
x