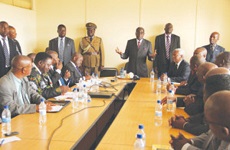 ZIMBABWE – A Serious fallout between Cabinet ministers has erupted over government’s failure to pay civil servants on time, it has emerged.

NewsDay understands that Mupfumira and Chinamasa faced off last week with the former saying the latter had to announce new pay dates for government workers as the cash-strapped Mugabe administration continued to dither on its promises.

According to the new dates Chinamasa later announced, teachers would be paid today, while the rest of the civil service would be paid on January 5 next year.

“Traditionally, such an announcement should have been made by Public Service minister Mupfumira,” a top government official who refused to be named told NewsDay
.
“But Chinamasa was forced to do so because Mupfumira refused.”

But Mupfumira yesterday downplayed her tiff with Chinamasa, saying it was only prudent for the Finance minister, who is responsible for the government purse, to make the announcement.

“We still work together (herself and Chinamasa), there is no misunderstanding. We simply agreed that the Finance ministry should make the announcement because they are responsible for sourcing the money. They know when they will pay the workers,” she said. “If I tell the workers when they will be paid and the government misses the dates, people will say I am not honest.”

Mupfumira, Moyo and Zhuwao were alleged to be desperate to expose Chinamasa.

Moyo yesterday took to micro-blogging site, Twitter, castigating the government for failing to pay civil servants before Christmas in a statement that appeared to be targeted at Chinamasa.

“Let’s be honest without prejudice, fear or favour, there’s no acceptable excuse or reason for not paying civil servants’ salaries before Xmas!” Moyo wrote.

Chinamasa was also a subject of attacks by Zhuwao after differences on proposed changes to the indigenisation programme. Zhuwao accused Chinamasa of “treachery” by proposing to
water down the empowerment laws when Mugabe was away on annual leave in the Far East.

Zhuwao was immediately backed by Moyo, who said the Finance minister was biting the hand that fed him.

“The whole thing rather than uniting the government for a cause to deal with this mess has been twisted into a succession platform. Some want to score cheap points against perceived factional opponents at a time when they should be helping find solutions,” a top Zanu PF official said yesterday.

The sources added that Chinamasa briefed Cabinet that the government coffers were dry, but some of his colleagues were putting him under pressure to get the money or resign.

“Indeed, Cabinet was briefed, but not to the extent of paying 2015 salaries in 2016. We are all appointed to deliver, no excuses. If Chinamasa cannot discharge the mandate he should step aside before he exposes all of us and ultimately the President,” a Cabinet minister said on condition he was not identified.

“Chinamasa was appointed to deliver. He is supposed to be creative.”

Following the civil service payment delays, the Zimbabwe Hospital Doctors’ Association (ZHDA) said its members would down tools if they were not paid their salaries and bonuses by December 31.

“Our members countrywide will not be able to attend to their duties from January 1, 2016 should this (payment of salaries and bonuses by December 31) be violated,” ZHDA said in a statement.

Government has said health practitioners would be paid on January 5.

Apex Council also blasted the government for not communicating with the civil service umbrella body and warned that the government’s move to renege on its promises would create a
social time-bomb.

Apex Council president Richard Gundane said the government had not communicated with them for the past three months.

Mupfumira, however, said: “There is nothing to tell them (Apex Council), the government does not have the money.”

Meanwhile; Doctors working at state hospitals and the main teachers’ union demanded the payment of salaries and bonuses before Dec. 31, warning of possible strikes next year.

Zimbabwe spends more than 80 percent of its budget on salaries, mainly for the army, police, teachers and nurses, but only managed to pay soldiers earlier this month.

Finance Minister Patrick Chinamasa said in a statement on Monday that December wages for teachers and other education sector workers would be paid on Tuesday.

“Treasury advises that the December 2015 salary payment date for the rest of the public service is also being moved from 29 December 2015 to 5 January 2016,” Chinamasa said. He could not be reached for further comment.

The government spends more than $260 million every month on salaries for more than 300,000 of its employees.

Zimbabwe finances its entire budget from taxes because lenders like the International Monetary Fund and World Bank will only consider fresh loans once it clears its debts. Tax revenues are falling as the economy struggles with weak commodity prices and high unemployment.

Chinamasa did not say when bonuses, equivalent to one month’s salary and traditionally paid in November, would be paid.

“Our December salary and 2015 bonus must be disbursed on or before Dec. 31. Our members countrywide will not be able to attend to their duties from Jan. 1, 2016 should this be violated,” read a statement from the Zimbabwe Hospital Doctors Association.

Last April, Chinamasa said the government would not pay annual bonuses to public workers for two years, citing falling tax revenues, only for President Robert Mugabe to reverse the decision.

ZIMBABWE - A Serious fallout between Cabinet ministers has erupted over government’s failure to pay civil servants on time, it has emerged. Yesterday, Public Service minister Priscah Mupfumira reportedly “washed her hands” over the issue and shifted ...
Share via
x
More Information