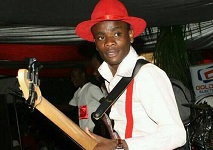 ZIMBABWE – Simbi hombe hit maker Romeo Gasa is optimistic that 2016 is going to be his year as he is working on a new album.

The Extra Valembe boss said he has work in progress and fans should expect it anytime soon.

“This year I promise my fans that they are going to get the best of me and are going to love what I’m preparing for them.

“At the moment there is a singles track Anyumwa Bere ndereke which is waiting to be released.

“All the work on the song is done what is left the date when it will be released.” He said

Gasa is promising fireworks as he is saying he is on top of the game.

The young man promises to surpass his last album he did last year Mupedza nyaya.

“As people are appreciating my music I want to continue doing more for them so that they keep on supporting me.

“I want my fans to have the best out of me this year and I want to thank God for helping me in my music.” He said

Gasa said for him last year was a success as he managed to launch his album Mupedza nyaya which he said will be doing videos soon if all goes well.

“I’m not going to sit and relax this year, my fans had been patient and now it’s high time I give them something that they will never forget.” Added Gasa