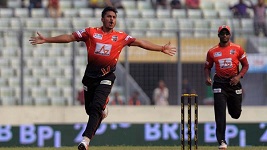 ZIMBABWE – Shuvagata Hom Chowdhury, who is yet to play an international T20 match, will be in the team, too.

Nasir Hossain and Litton Kumer Das will sit out the first two matches of the four-match series, a source in the Bangladesh Cricket Board has confirmed.

The selectors delivered the squad list for the first two matches to Bangladesh Cricket Board on Sunday.

The team will be officially announced following the approval of the BCB president as per the rules.

The inclusion of left-arm seamer Rony, who put up some fine performances in the Bangladesh Premier League, was somewhat certain but the addition of Nurul to the fold came as a surprise.

Bangladesh have been in search of a batsman to play at No. 7 in T20s for some time. The team management is likely to thrust Nurul into the role with the World T20 coming a couple of months later.

Although Chief Selector Faruque Ahmed was unwilling to disclose the details of the team, he hinted at the possible change

“Keeping the World T20 in sight, we want to play some new cricketers. The Zimbabwe series will give us that chance.

“I don’t want to say anything before the team is announced but you can expect some new faces.”

The BCB source said Shuvagata was selected in place of Nasir mainly for the latter’s ability to deal with spin and play shots early in his innings.

Nasir, however, was still very much in contention for a spot in the 15-man squad for the World T20, he said.

Opener Imrul Kayes has retained his spot after doing well in the BPL. Injured pacer Rubel Hossain might make way for Taskin Ahmed.

Although the series is yet to be officially announced, it is all but finalised.

Elton Chigumbura and his men are scheduled to reach Bangladesh on Jan 11 after the conclusion of their series against Afghanistan in the United Arab Emirates.

ZIMBABWE - Shuvagata Hom Chowdhury, who is yet to play an international T20 match, will be in the team, too. Nasir Hossain and Litton Kumer Das will sit out the first two matches of the four-match series, a source in the Bangladesh Cricket Board has confir...
Share via
x
More Information