ZIMBABWE – Government has warned individuals and institutions to follow proper procedures if they want to operate broadcasting services or risk facing the full wrath of the law.

Speaking during a familiarisation tour of New Ziana and the Broadcasting Authority of Zimbabwe yesterday, Information, Media and Broadcasting Services Minister Dr Christopher Mushohwe said it was surprising that some companies were announcing broadcasting dates of their “television channels” although they did not apply for licences.

“As long as you want to broadcast in Zimbabwe for the audience in Zimbabwe then the domestic law must be respected,” he said.

“For one to operate broadcasting services in Zimbabwe, they should have a licence from BAZ.

“According to the Broadcasting Services Act, BAZ was given the mandate to license and to regulate provision of broadcasting services in Zimbabwe.”

Dr Mushohwe said BAZ required Government support for it to fulfil its mandate efficiently in light of digitisation.

He said he was impressed with BAZ’s performance given that it had little resources and faced manpower shortages.

“Everything possible will be done for BAZ to fulfil its mandate,” he said. “Yes, you need engineers, accountants and professional lawyers.”

BAZ chief executive Mr Obert Muganyura said there was need for Government to review the Broadcasting Services Act in view of grey areas and developments in technology.

“The biggest challenge to Zimbabwe was the issue of funding the migration process, the process requires the replacement of analogue studio and transmission equipment with new digital equipment,” said Mr Muganyura.

“Funding challenges were addressed through selling of Digital Dividend spectrum to NetOne which raised $200 million against the required $125 million. However, there are now teething problems relating to the release of funds by RBZ to meet contractual obligations, seriously impacting on the project implementation.”

Mr Muganyura said the digitisation exercise was 33,6 percent complete, but there were outstanding payments to Huawei and other service providers amounting to $42,4 million.

The agency’s acting chief executive, Mr Rangarirai Shoko, said his organisation was trying to carry out its mandate despite limited funding from Government.

“Our community newspapers are visible across the country and we are sending stories to media outlets across the globe, giving the true Zimbabwean story,” he said.

Mr Shoko said the bulk of the agency’s vehicle fleet was old as Government last provided funding for vehicles in 2003.

Dr Mushohwe said the story of Zimbabwe needed to be told and understood beyond the borders.

“Your dissemination of the real situation is important, especially to potential investors who are fed up with propaganda,” he said. “There is need to hear the other side of the story.

“Our friends outside need to be kept abreast with the events in our country. You deserve every support. We are aware that you are not getting enough of your budgetary support.”

“We appreciate the role your organisation is playing in providing community newspapers given the little resources you have,” she said. 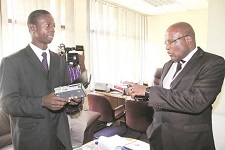 ZIMBABWE - Government has warned individuals and institutions to follow proper procedures if they want to operate broadcasting services or risk facing the full wrath of the law. Speaking during a familiarisation tour of New Ziana and the Broadcasting Autho...
Share via
x
More Information
x