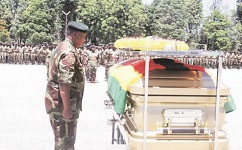 He was supposed to have been buried yesterday at Bindura Heroes’ Acre, but the process was delayed to allow for the return of his children and other relatives from abroad.

The Mhandu family yesterday said it expected the late Rtd Brig- Gen Mhandu to be accorded national hero status considering his contributions during the liberation struggle and to the nation after the war.

Rtd Brig-Gen Mhandu’s brother, Mr Freddy Musonza, said the late hero worked hard for the independence of Zimbabwe and preservation of its sovereignty.

“He was influential in recruiting people to go and fight during the liberation struggle and also played a major role in educating people, especially children of maids and gardeners,” he said.

“We were inspired by his works. He worked wholeheartedly for the nation and we thought (that) he was going to be buried at the National Heroes Acre, where his fellow comrades are,” he said.

Family spokesman and brother Rtd Lieutenant-Colonel Cairo Mhandu announced that the burial had been shifted to Harare. “We decided to shift to Harare for convenience. My brother should have been buried at Harare Provincial Heroes Acre at Warren Hills, but the family decided to bury him at Glen Forest because of the deplorable conditions at Warren Hills,” he said.

Son to the late hero, Mr Everisto Mhandu, said: “He assisted many people and unified the family. He treated all the children the same and never discriminated against people,” he said.

“He was the first to live in the low-density areas in our family, but he still welcomed us to his home. He assisted relatives with school fees and sent many relatives to school. We have lost a father and his gap will not be easy to fill,” she said.

During the liberation struggle, Rtd Brig-Gen Mhandu abandoned his job as a teacher to fight against the white settler regime.

He crossed the border to Botswana and later joined other cadres in Zambia for initial military training before proceeding to the then Soviet Union for further training.

He was nominated to attend a military intelligence course in the then German Democratic Republic in 1977.

He was attested into the Zimbabwe National Army in 1981 as a colonel. He was the first black director of military police and was posted to headquarters.

Born on November 11, 1947 Rtd Brig-Gen Mhandu is survived by his wife, seven children and several grandchildren.

ZIMBABWE - Liberation war hero Retired Brigadier-General Jimmy Mhandu, popularly known by his Chimurenga name, Cde Patrick Nhamo, will be buried this afternoon at Glen Forest Cemetery in Harare. He was supposed to have been buried yesterday at Bindura Hero...
Share via
x
More Information
x