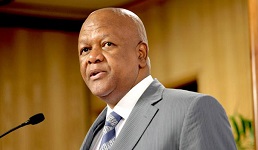 ZIMBABWE – A South African minister says despite the rejection of the rand by some sectors of the Zimbabwean economy, trading and economic relations between the two countries have remained strong.

Local retailers and traders have been rejecting the South African rand as it continues its depreciation against the United States dollar. One dollar is currently being exchanged at between R13 and R14.

This has seen a gradual shift to the bond coins, which are at par with the United States dollar.

Speaking to NewsDay on the sidelines of the 8th edition of the African Media Leaders Forum 2015, Minister in the Presidency for Planning, Monitoring and Evaluation Jeff Radebe said the economic and trade relations between South Africa and Zimbabwe remained strong.

“As far as our relations are concerned, the relationship between South Africa and Zimbabwe remains strong, I think, deeply and at a very high level. The decisions Zimbabwe takes as a sovereign State, our government respects,” Radebe said, adding that the move “does not affect our trade, economic and total relations between the two countries”.

South Africa is Zimbabwe’s largest trading partner. In the first half of the year, 68% of Zimbabwe’s exports were to South Africa. Imports from South Africa constituted 40%. Radebe said the main issue between the two countries going forward would be deep economic co-operation.

“We have to ensure we dip into those deep economic relations that will build a strong Sadc. What happens in the world is when the global economy sneezes all of us catch a cold,” Radebe said.

“What is important is our resilience as African states to stand up to ensure we implement policies that will reduce the levels of poverty.”

The rand is in the basket of the multicurrency regime adopted in 2009 to stem hyperinflation, which rendered the local currency worthless.

Confederation of Zimbabwe Retailers’ president, Denford Mutashu said bond coins in circulation were less than 2% of the money in circulation, “but other countries have a circulation of between 12% and 25% as coins, which I urge the central bank to follow”.

ZIMBABWE - A South African minister says despite the rejection of the rand by some sectors of the Zimbabwean economy, trading and economic relations between the two countries have remained strong.  Local retailers and traders have been rejecting the South...
Share via
x
More Information
x