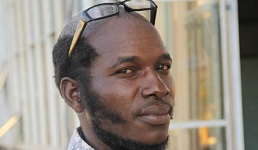 The DVD was released last week and according to local drama followers, the DVD has been selling like hot cakes.

The DVD was produced and fine-tuned in China.

In an interview with The Standard Style last week, the popular comedian said they were constantly sharpening their marketing strategy so that they get the best revenue from their production.

“We are on a whirlwind tour as we are marketing Sabhuku Vharazipi 3. We are selling the DVD on our own as a way to thwart piracy,” said the talented actor.

“We virtually did not get anything from Sabhuku Vharazipi 1. But on the second edition we were cleverer and got something. I hope the new play will be smarter,” he said.

Business came to a standstill in the city centre as Mubaiwa, who was accompanied by Wellington Chindara who plays Chairman in the drama and his wife Kumbirai Chikonye (Mbuya Mai John) moved around the city centre.

The Masvingo-based actor said the new project had many intriguing scenes that will keep viewers captivated and spellbound.

“Sabhuku Vharazipi 3 has many surprises. We had many twists and turns in the play. We hope viewers will get captivated,” he said.

“The new DVD has new faces after the departure of some of our members. I am glad to say that they are equally talented.”

He bemoaned piracy, saying it was heavily affecting their business.

ZIMBABWE - Comedian David Mubaiwa, popularly known as Sabhuku Vharazipi, has devised new ways of marketing his new DVD project: Sabhuku Vharazipi 3. The DVD was released last week and according to local drama followers, the DVD has been selling like hot ca...
Share via
x
More Information