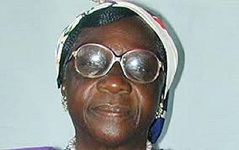 ZIMBABWE – The heroine status of Pesident Robert Mugabe’s sister, Sabina Mugabe, has been questioned by members of the MDC-T six years after she was interred at the national shrine. Lawyers Tinomudaishe Chinyoka and Zengeza East MP Alexio Musundire (MDC-T) have approached the Constitutional Court seeking to have the National Heroes’ Act declared unconstitutional and to bar Mugabe and Zanu PF from further declaring heroes.

Questions over Sabina’s heroine status are contained in an affidavit filed by Chinyoka, who is seeking to challenge Mugabe over the criteria that has been used in selecting heroes and heroines to be buried at the National Heroes’ Acre.

“While for purposes of my studies and to fulfil a particular purpose irrelevant to these proceedings, it has sometimes been necessary to associate with another political party called Zanu PF, the correct position is that I am not now, have never been and will never be a supporter of Zanu PF,” Chinyoka vowed.

“It is my humble belief that the powers given to first respondent (Mugabe), under Section 3 of the Act, are incompatible with the right to administrative justice or are otherwise in violation of the Constitution because of their arbitrary nature.”

Chinyoka cited six heroines interred at the shrine, adding: “All of them, except one, appear to have only one factor known to me: that they were married to liberation war leaders.

“The only exception, a certain Sabina Mugabe, was not married to any liberation war leader, and is not chronicled in any government or other publication that I am aware of with having done anything of note.

“She, however, is the sister of the first respondent (Mugabe), whose first wife is also one of the other five aforestated.”

Chinyoka said in the exercise of his right to freedom of profession, trade or occupation, he would have loved to order his affairs in such a way that he might, one day, qualify for designation as a national hero.

But because there was no consistency in decision-making to set out guidelines as to what qualifies one for heroism, he was unable to plan for such an honour.

“I am not helped in this regard by the fact that Section 3 of the Act is as vague as to be meaningless. I do not know what is meant by being a citizen that ‘has deserved well of his country’. I think a person’s beauty (which I lack such as that of the late Mrs Susan Tsvangirai) could be recorded as ‘well deserving’,” he said.

“The vagueness is compounded by the puzzling decisions that the first respondent (with the help of third respondent (Zanu PF) has made regarding designation of people as heroes.”

Chinyoka cited the late philanthropist Jairos Jiri, whom he said dedicated his life to helping the blind and disabled, but when he died, was not declared a national hero.

He also cited the late former Prime Minister and Dadaya Mission founder Garfield Todd and Zanu PF first president, the late Ndabaningi Sithole, who were not considered heroes despite their efforts to serve the country.

“Yet there are some individuals that have been declared heroes, but whose deeds have not been known to anyone. Another example is that while the women referred to above appear to have been declared heroines for being married to politicians, when the wife of Morgan Tsvangirai died, there was not even a consideration of whether or not she could be declared a heroine.”

ZIMBABWE - The heroine status of Pesident Robert Mugabe’s sister, Sabina Mugabe, has been questioned by members of the MDC-T six years after she was interred at the national shrine. Lawyers Tinomudaishe Chinyoka and Zengeza East MP Alexio Musundire (MDC...
Share via
x
More Information