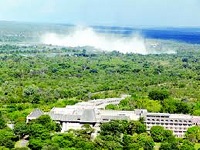 ZIMBABWE –  operations this year suffered a 30% reduction in revenue owing to, among other things, the continued ban on ivory hunting and the killing of the famous lion, Cecil, businessdigest has learnt.

Safari Operators Association of Zimbabwe (Soaz) chairman Emmanuel Fundira told businessdigest that the continued ban of the importation of sport hunted elephant trophies from Zimbabwe imposed in April last year by the United States government, as well as the ban by airlines on transporting ivory had an adverse impact on its operations throughout the year.

The US Fish and Wildlife Service announced a suspension on imports of sport-hunted African elephant trophies taken in Tanzania and Zimbabwe during the calendar 2014 year.

“In Zimbabwe, available data, though limited, indicates a significant decline in the elephant population. Anecdotal evidence, such as the widely publicised poisoning last year of 300 elephants in Hwange National Park, suggests that Zimbabwe’s elephants are also under siege,” the organisation said.

“Given the current situation on the ground in both Tanzania and Zimbabwe, the Service is unable to make positive findings required under the Convention on International Trade in Endangered Species of Wild Fauna and Flora (Cites) and the Endangered Species Act to allow import of elephant trophies from these countries.”

“The ban on hunted elephant trophies and the ban by airlines on transporting ivory has been a real challenge for the sector,” Fundira said. “ We can safely say that there was a 30% drop in our numbers which is very significant.”

He said the photography sector of the industry has been hampered by the killing of Cecil which generated negative headlines worldwide.

Rangers in Zimbabwe’s Hwange National Park discovered the carcasses of 26 elephants at two locations in October which had been killed by cyanide poisoning.

Bhejani Trust and the Zimbabwe National Parks and Wildlife Management Authority made the announcement, a week after 14 other elephants died under similar circumstances.

“The photography side was badly affected by the death of Cecil. The poisoning of elephants by cyanide did not give a human face to the industry,” Fundira told businessdigest.

He pointed out that efforts of looking for alternative in Eastern Europe were ongoing with encouraging prospects. Fundira however said it will take time for their efforts to bear fruit.

ZIMBABWE -  operations this year suffered a 30% reduction in revenue owing to, among other things, the continued ban on ivory hunting and the killing of the famous lion, Cecil, businessdigest has learnt.  Safari Operators Association of Zimbabwe (Soaz) c...
Share via
x
More Information
x