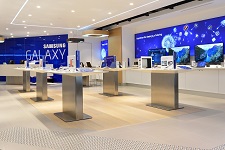 The company, through its local partner SamZim, intends to assemble 50,000 refrigerators and the same number of televisions every year.

Acting President Mnangagwa, speaking after touring the Graniteside and Zimpost Complex plant along Airport Road, said it was pleasing to see investors coming to Zimbabwe.

Of great importance, he said, the investment was coming with technology transfer as Zimbabweans were being trained on how to assemble the products.

“I toured the first assembly plant where they are assembling six different types of refrigerators,” he said.

“They’ve already done a test run and have shown us the assembled refrigerators, but they’re now waiting for licensing by the relevant authorities.

“There’s also transfer of technology because there’s a training school where they’re taking on 100 students to train in technical issues relating to gadgets, assembling of their products. They want to train our people to do those things.”

He said he had been informed that in the long run the company intended to manufacture various Samsung products.

As such, he said, he would assist the company to clear some of the small hurdles it was facing with regards to licensing.

“This is phase one and I am told phase two will graduate into manufacturing these components here first and as we go on the entire products will be manufactured here,” he said.

“We are very much grateful that such investments are coming into the country. I have to discuss with the relevant authorities like the Ministries of Finance and of Industry to make sure they do their part.

“We are all anxious to have investment in the country. I am sure there are technical issues that are constraining them to proceed, but I want to know what those issues are.”

An official from SamZim’s procurement and external relations department, Victor Dhlakama, who took the Acting President around the plants said about $1,3 million had been invested in the setting up the factories.

He said their employment stood at 120 and more Zimbabweans would be engaged as the business expanded.

“On the TV side, we have 36 employees, while on the refrigerator side we have about 58 and it comes to 120 if you add merchandisers and the administration workers,” Dhlakama said.

“Like any new business, we have challenges and we hope to get over them soon. The biggest thing was setting up plant and this has been done and we are following the country’s laws.

“We’ve started with these two products but we will also look deeper into other products as we go forward.”

ZIMBABWE - South Korea telecoms giant, Samsung, has started assembling televisions and refrigerators in Zimbabwe, Acting President Emmerson Mnangagwa heard this yesterday during a tour of the company’s two factories in Harare. The company, through its lo...
Share via
x
More Information