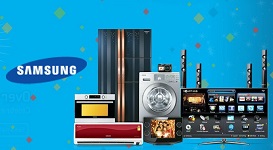 The company’s country manager, Gavin Claire, confirmed the development but could not shed more light on the actual investment made by the South Korea-based electronic giant.

“We have already started manufacturing TVs and refrigerators for sale in Zimbabwe, but you can talk to our local partners for more details,” he said.

This comes as Samsung early this year signed a $10 million deal with a local company, Cranbal Investments that paved way for the setting up a television and refrigerator assembly plant in the country.

Cranbal Investments — the majority shareholder in ART Corporation — recently indicated that the company expected to spend $1 million on the television plant which would assembly TV sets ranging from 28 inches to 55 inches.

The company also noted that the fridge assembly plant will also cost $1 million and would involve putting together over 15 parts to make chest freezers and the 3050 TMF model.

Knockdown kits for the first year of operation are valued in the range of $7 million financed from Korea.

The country is struggling to attract meaningful foreign direct investment due to controversial policies such as the Indigenisation Act that forces foreign-owned firms to cede 51 percent shareholding to locals.

Latest statistics from the United Nations Conference on Trade and Development show that Zimbabwe’s foreign direct investment has remained embarrassingly low at $545 million compared to other regional countries such as Mozambique.

Last month, the country launched a National Competitiveness Report in an effort to attract the elusive foreign capital.

“Most investors rely on such reports in making decisions on investment destinations. This explains our current efforts as evident from the measures and strategies which we are implementing to ensure that we improve on our ranking,” Vice President Emmerson Mnangagwa said during the launch.

“The ZNCR provides historic benchmarking for the first time and can go with the consensus around achieving Zimbabwe’s prosperity. This is critical in areas which need urgent intervention to enable Zimbabwe’s economic exploits to achieve the robust economic growth target of seven percent per annum in the national blueprint ZimAsset.”

This comes after Zimbabwe slipped one place to 125 out of 140 countries on the Global Competitiveness Report (GCI) 2015-2016.