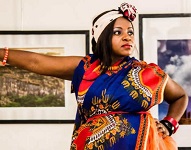 Sandie, as she is celebratory called by her worldwide fanatics, she  still energetically danced with one of the Zimbabwean global poet icons Ubaba Albert Nyati, Jeyz Marabhini and many more.

Exclusively to Harare Metro (H-Metro) Sandie, opened up on this two months due child of a famous artist and said,

“kkkk, yes I am pregnant and only two months left to deliver it to this world of arts, pregnant women must all ways seriously exercise hourly hence eradication deaths to both moms and infants during delivering ,” said Sandra Ndebele.

She was born on January 3, 1982 in Bulawayo and was raised in Tshabalala Township before her family moved to Nkulumane Township. She did her secondary education at Founders High School and is married to Nkanyiso Mbusi Sibindi and the couple has two children. She used to dance on and off road and home, lonely even with other agemates, she played with anyone with easy.

The generous Sandie danced to much social community responsibilities like In 2007 she donated a Baumanomet machine to Princess Margaret Rose Clinic in Bulawayo. The machine is used to check blood pressure. At the time of the donation, the clinic had gone without a Baumanomet machine for months. Her passion for assisting children with education saw her in 2004 holding a fundraising show at SOS Hermann Gmeiner Primary School in Bulawayo. SOS School Orchestra, the school’s marimba band, curtain raised for her, during the show that was held to fund raise for library books. In 2005 she performed at a number of primary schools in the country to assist them in raising funds. In Bulawayo she performed at schools which include Tategulu in Cowdray Park, Robert Tredgold in Makokoba, Mahlabezulu in Tshabalala and Barham Green Primary School. In Gweru she performed at Munga Primary School in Ascot, Riverside Primary School in Athlone and Matinunhura in Mkoba.

She also held shows to fundraise for Midlands State University. The shows were to raise funds for the building of a multipurpose hall, boosting the university library and improving gender awareness programmes. In 2006 she opened a culture centre, Umuzi Wakwethu and a restaurant specializing in traditional foods at Amakhosi Township Square Cultural Centre.

Sandie, as she is popularly known in show business, was set to feature as Siphetho in Cont Mhlanga’s drama called The Nyaminyami. She plays the part of a wife of a farm manager, played by Thulani Mbambo. Mhlanga said he was surprised and impressed by the mother of two’s performances during the auditions.

Sandra provides a wide range of traditional Ndebele mastery in the art of beadwork. Traditional beaded garments include Necklaces, bracelets, imisisi (traditional skirts) and even bras are available in the form of beads. She is also an aspiring fashion guru, bringing in the latest fashion trends for resale in Zimbabwe.

It was her unique style of dancing that saw her rise to stardom and was arguably one of the best artistes in the country. However, her dance style soon earned her all sorts of names and was described as loose and likened her act to a sign of moral decadence.

ZIMBABWE - Sandra Ndebele, a female Zimbabwean musician, director, actress, choreographer and dancer is now seven months pregnant. Sandie, as she is celebratory called by her worldwide fanatics, she  still energetically danced with one of the Zimbabwean g...
Share via
x
More Information
x