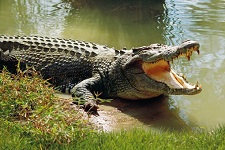 Congregates from various suburbs in Harare hired commuter omnibuses to Houghton Park and Waterfalls for cleansing ceremonies in Mukuvisi River.

Most of the people who spoke to H-Metro said they were unaware of the crocodile stories saying they were after removing bad omens by getting baptised at water falls.

“Crocodiles are only found in big rivers not Mukuvisi my friend its only that people hate mapositori and you are always after negative reporting concerning our ways of worshipping,” said one of the members at the scene refusing to identify self.

“I will not be stopped from visiting this place for cleansing since it helped me and very soon we will see such prophets coming here as well.

“We conduct baptism here and other cleansing ceremonies and if there is any snake or crocodile in this river it will vacate until we finish baptizing people, tine simba guru,” she added.

H-Metro witnessed mostly women and children under going baptism by the falls and the place is a crossing point for people from Waterfalls to Houghton Park.

Police are warning the public against using Mukuvisi River for baptism.

“Zimbabwe Republic Police would like to urge members of the public to value their lives by not being taken for granted by self-styled prophets.

“We are urging those prophets if possible not to use Mukuvisi River or any other rivers elsewhere in conducting their cleansing ceremonies or baptism following reports of crocodiles attacking people,” said police spokesperson Chief Superintendent Paul Nyathi.