Shock and drama as council allocates stands on tarred streets 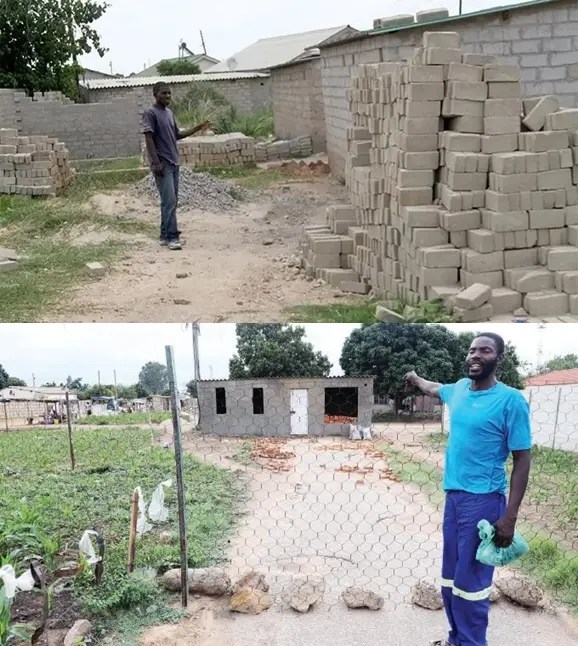 HARARE – Shock and drama as council allocates stands on tarred streets. Some of the streets in Glen Norah have been converted into stands, regardless of the outcry by residents condemning the continual sprouting of illegal structures in the suburb.

The corruption-riddled Harare City Council has torched yet another storm after facilitating and allocating several residential stands on tarred streets in Harare, plus converting recreation areas and wetlands to housing stands and wantonly disregarding laid-down by-laws to take rich pickings from desperate home seekers.

Another completed structure built next to house number 1486 close by Narira Street around Glen Norah Flats was also erected in the middle of the road two months ago. A 44-second video clip of comedian Timothy “Timmy” Tapfumaneyi of the “Timmy naBonzo” fame blaming the corrupt council officials for disregarding by-laws has since gone viral.

“I am in Glen Norah A, Chitubu area, Narira Crescent where I grew up. I decided to visit my childhood area, but I was shocked to see a house being constructed in the middle of a road. “This is the way we would use going to the Chitubu Shopping Centre, but now there is a house. The council has gone to the dogs. We need new leadership,” he is heard fuming.

In Glen Norah yesterday residents had no kind words for the developments, demanding that the houses be demolished and the road be restored. Mr Gwinyai Mutunga said the houses must be removed as they were blocking their way to Chitubu Shops.

“This is a road which we used to go to the shops but now it is impassable. The house was built on the road and as residents we are saying it should be demolished. We understand the stand was given to the nephew of a local Member of Parliament (of the MDC).

“We do not know the owner of the other house but what we want as residents is the demolition of the two houses because we cannot have houses built on the road. We are very disappointed with what is happening in council and they should respect the residents,” he said.

Another resident, Mrs Eveline Masango said the building of the houses started early last month and it was done in a hurry to avoid protests by the residents.

“We as residents are not happy with these developments and they are clear signs of corruption. We were shocked to see bricks being offloaded in the middle of the road. If the Government can give us permission we can demolish the houses ourselves,” she said.

One resident, who spoke on condition of anonymity, said the whole street was taken aback to see the construction of the house despite numerous objections from residents.

“It actually took us by surprise to see someone digging a foundation on a tarred road claiming to have been allocated the land by council officials,” said the resident. Mufakose residents a few weeks ago complained over the conversion of playgrounds and wetlands into residential stands.

Pegs demarcating residential stands were observed within playgrounds at social centres in Area E, Cherima, Area J, and a wetland next to Hweru Road. Combined Harare Residents Association programmes manager Mr Rueben Akili said it was worrying that houses were being built on open spaces, roads and road servitudes.

The city’s masterplan is three decades old, and many of the local plans, that govern each suburb or section of a suburb, are even older. A resident, Mr Shepherd Chikomba said corruption was rife and should be uprooted in MDC-led councils.

“These corrupt councillors and officials are there to fatten their pockets. Allocation of stands should be done through a housing waiting list, not this scenario where Clrs are allocating stands,” he said.

Chaos has now become common in almost all the MDC-A led local authorities as more illegal structures are sprouting at undesignated spaces. Residents in Chitungwiza are also protesting the move by the council to allocate a commercial stand at Try Again shops in Unit N.

Shock and drama as council allocates stands on tarred streets

HARARE - Shock and drama as council allocates stands on tarred streets. Some of the streets in Glen Norah have been converted into stands, regardless of the outcry by residents condemning the continual sprouting of illegal structures in the suburb. The cor...
Share via
x
More Information