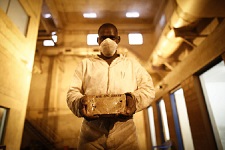 Producers of the precious metal that has fallen 42 percent from a June 2011 record have instituted “survival measures” such as reducing wages and working hours, negotiating discounts with suppliers and replacing contractors with in-house staff, the Chamber of Mines of Zimbabwe said in a document to the government obtained by Bloomberg. The organization, which represents companies including No. 1 local producer Metallon Corp., want royalties trimmed to to as low as 2 percent from 5 percent now, and power tariffs cut 48 percent to 6.7 U.S. cents per kilowatt-hour.

The strategies “have not helped much as companies continue to operate below their breakeven point,” the chamber said. Reducing royalties and power tariffs “will assist producers to break even and sustain production, and ameliorate the potential incidences of closure or placements under care and maintenance, whose adverse implications on employment and revenue are far-reaching.”

Mining is the biggest source of foreign exchange for Zimbabwe, which has the world’s largest platinum reserves after South Africa and also has chrome, and iron ore. The government raised or imposed taxes on everything from mines to water over the past 18 months to finance its budget, just as producers grapple with a plunge in metals prices.

Low ore grades that average 2.5 grams per metric ton contribute to the poor competitiveness of the nation’s mines, the chamber said. Averages in other countries range from 4.2 grams to 18.2 grams a ton.

Production costs for Zimbabwean gold mines average $1,170 an ounce compared with a mean of $878 an ounce for operators elsewhere on the continent, the chamber said. Gold has dropped 8.9 percent in the past year, and traded at $1,106.33 an ounce at 11:30 a.m. in London Friday.

The chamber recommended indexing power tariffs to the prevailing gold price and indexation of royalties to movements in the bullion price.

ZIMBABWE - Gold producers in Zimbabwe asked the government to lower royalties and electricity tariffs to reduce the risk of mine closures, the biggest industry lobby group said. Producers of the precious metal that has fallen 42 percent from a June 2011 re...
Share via
x
More Information