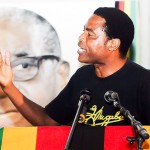 ZIMBABWE – At the time Jabulani Sibanda thought he was a hero but now he is deny having been involved in the widespread 2008 election violence in Zimbabwe. He made a name for himself as a ruthless thug, a thug after Mugabe’s own heart. After that any Zanu PF politician who needed his/her political opponents roughed up and/or the electorate whipped into line they called Jabulani Sibanda to do the dirty work for them.

Mugabe and Zanu PF rewarded Sibanda by showering him with praise and he was the guest of honour hobnobbing with the who-is-who is Zimbabwe politics.

When Mugabe announced that there was going to be an elective Zanu PF congress in December 2014 Sibanda must have been spoilt for choice as each of the Zanu PF bigwigs would have wanted him on their side; if he could rough up the party’s opponents he will, no doubt, rough up the bigwig’s internal opponents too. Jabulani Sibanda being Jabulani Sibanda, the thug of thugs had a reputation to keep and he did not disappoint.

In the upcoming elective congress the only real big contest that mattered was for the first VP and the two contestants were Joice Mujuru and Emmerson Mnangagwa. Sibanda chose to back Mujuru. She went on to amass the support of 8 out of the 10 provinces and was set to win.

In August 2014, just four months before the elective party congress, President Mugabe entered Zanu PF’s mucky politics with a bang. From the word go it was clear she was a woman on a mission to stop Joice Mujuru being elected VP at all cost. She went straight for Mujuru’s jugular, accusing her of being corrupt, lazy, plotting to kill Mugabe and dividing the party.

The only charge that made any sense on face value was that she had divided the party but then since this was going to be elections there was going to be winners and losers as members supported one candidate and not the other. As for the other charges; of course she is corrupt but so are the entire bigwig Zanu PF party members including the Mugabe himself.

The plot to kill Mugabe was never proven; in any case since she was set to win the vote and thus get the party members’ mandate to be first VP and heir apparent to Mugabe why then would she still want Mugabe murdered when she has got what she wanted already.

It was soon clear that there was a plot afoot to stop Mai Mujuru being elected VP at all cost. Mnangagwa and Grace Mugabe herself had presidential ambitions, she said as much herself, and an elected Mujuru would rule out everyone else. So the plan was to force Mujuru out of the party and allow Mugabe to appoint whoever he pleased to be first VP. So Grace’s name was now in the hat for first VP and then president. It was at this point that Jabulani Sibanda came to his own.

As a Mujuru supporter Jabulani Sibanda pointedly refused to attend Grace Mugabe’s rallies were Mujuru’s name was dragged in the mad and worse. But to rub hot chilli to his political insult of not attending Grace’s rallies Jabulani dismissed the whole scheme elevating Grace to a position where she could even be president as “bedroom coup!” Well that was a savage blow and both Mugabe and his wife felt that one.

Jabulani Sibanda was kicked out of the party a.s.a.p. and so were Joice Mujuru and a few of her main supporters. By the time the party congress was held Mugabe had changed the party’s constitution allowing him, and not party congress members, elect to two VPs.

Mnangagwa was named first VP but to underline that his wife Grace was still in the running, Mugabe made is very clear that the race for his successor was still open and being first VP counted for nothing. Of course Mugabe will never admit it but many people believe that “bedroom coup” jibe helped him decide that appointing Grace first VP would have been confirmed there had been a bedroom coup!

Ever since his booting out of Zanu PF, Jabulani Sibanda, the Zanu PF thug to be feared like no other party thug, has been busy filing the rough edges of his image as a thug.

“When I was national chairman of war veterans in 2008, there was no genuine war veteran who was involved in that violence,” Jabulani Sibanda told the Zimbabwe Independent. “It was a Third Force.

“I don’t want to talk about the Third Force, but people know what happened.”

When he was pressed he did admit to playing a part in stopping regime change.

“They had said in their parliament they are working with the MDC to achieve regime change in Zimbabwe. That statement prompted me to discuss with war veterans how to defend our freedom by stopping the British from achieving their agenda.”

Actually Sibanda, the nation knows you were involved in the harassment, beating, rape and possibly even murder of many innocent Zimbabwe back in 2008 and for many years thereafter till you were finally and unceremoniously kicked out of Zanu PF. Be rest assured that we will get to the bottom of what really happened here including the vote rigging of the July 2013 elections.

Being kicked of Zanu PF has pricked Jabulani Sibanda’s conscience, enough for him to admit he is a thug but nowhere near enough to force him to admit any thuggery. A few more turns of the screw and he will tell who or what is this animal called Third Force. People like Jabulani Sibanda act without the slightest consideration for the rights of others even their right to life confident they are above the law but sooner or later they get caught out. They get lured into believing they will never be asked to account for their past and they are shocked when they finally discover the wheel of justice turns.

ZIMBABWE - At the time Jabulani Sibanda thought he was a hero but now he is deny having been involved in the widespread 2008 election violence in Zimbabwe. He made a name for himself as a ruthless thug, a thug after Mugabe's own heart. After that any Zanu...
Share via
x
More Information