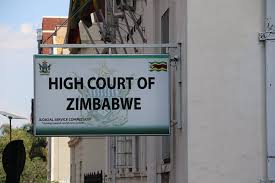 HARARE – Justice Erica Ndewere, the Hight Court Judge who recently gave MDC-Alliance vice chairman, Job Sikhala bail has been suspended by the Judiciary Service Commission and is being accused of ‘misconduct’.

This follows reports that Chief Justice, Luke Malaba was not happy with the bail judgement by Ndewere in the case of the State against Sikhala which has prompted the suspicions that she is being punished for her brave act.

The Permanent Secretary in the Ministry of Justice, Virginia Mabhiza confirmed this development, saying Justice Ndewere is accused of “misconduct and conduct inconsistent with being a judicial officer.”

She also added that the JSC has referred the matter to President Emmerson Mnangagwa to appoint a tribunal to “inquire into the question of removal from office of Justice Erica Ndewere.”

It is reported that Ndewere avoided all the usual procedures before delivering the judgement to ensure that spies within the judiciary structures didn’t have access to the judgment before it was passed.

The country’s justice system has faced strong criticism with accusations that it is captured and weaponised by the Zanu-Pf led government to punish dissenting voices.

The accusations are because of some strange judgements the courts have passed especially in relation to individuals or organisations that are deemed a threat to the Zanu-Pf hegemony.

Magaisa has always maintained judges are always pressured to pass their judgments in favour of the government.

He tweeted, “Don’t underestimate the courage of the judge who gave Job Sikhala bail. I wouldn’t be surprised if she suffers for it. When you do things against the system’s wishes, the system finds something to hit you with. Sooner or later you will hear they are investigating Justice Ndewere for this and that.”

Sikhala was arrested and subsequently detained at Chikurubi Maximum Prison for supporting the 31 July Anti-Corruption protests.

He, together with other key supporters of the protests including Hopewell Chino’no and Jacob Ngarivhume were arrested as the government swiftly moved in to thwart the protests.

They are all currently out on bail under very strict conditions which include limitations to how they use social media.

Kaukonde: its madness to link me to Mujuru