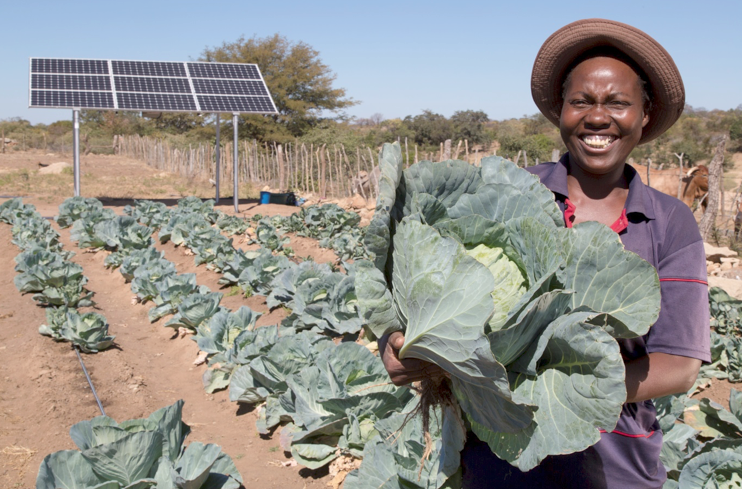 BUHERA – For many years, farmers in Mutunha community in central Buhera district struggled to make a living due to persistent climate change induced droughts that have become a permanent feature.

With climate change increasingly taking its toll on Zimbabwe, Buhera has suffered heavily as food production plummeted every year forcing farmers to turn to irrigation using water from a nearby dam.

Faced with the challenges of irrigating their crops using watering cans, Buhera farmers came up with an innovative way to adapt to climate change which is a Solar-powered irrigation system.

Using a 75 horse power pump they draw water from a nearby dam.

Trymore Mashavira (41), one of forty two farmers working on the project in the drought-prone district lamented the challenges the community was facing and how the solar powered irrigation system has transformed livelihoods.

“Erratic rain patterns, compounded by longer periods of drought had taken a toll on us. We were facing challenges of using water cans and 25 litre buckets to draw water from the dam. Imagine drawing water from a distance of about two kilometres.

“This is now a thing of the past, we got support from donors and came up with the solar irrigation project that has transformed our lives and most of the farmers within the project are realizing their potential,” Mashavira said.

Another farmer, Prince Mutunha says the irrigation project has enabled them to diversify and plant crops throughout the year.

“The solar irrigation project has opened new avenues for us as it has allowed diversify crops and also improved our resilience to climate shocks. In the past we used a diesel powered pump which was costly. Later we turned to manual labor which meant more challenges. Solar irrigation has improved productivity and diversity,” said Mutunha.

The 113 solar panels provide power to directly pump water through irrigation pipes from the dam to the 18 hectare arable land with the remaining 7 hectare reserved and is under development.

46-year-old Gamuchirai Rwenhamo, a former teacher who owns a piece of land in the project says the effects of climate change had made life difficult for the famers and the coming in of the solar project has opened new avenues.

“Climate change is real, the majority of farmers had been dependent on rain fed agriculture since time immemorial, and successive droughts induced by climate change meant that there was no production on our pieces of land. The advent of the solar irrigation project was a turning point.

“We now have ambitious targets of increasing the amount of irrigated land, to this end we are now looking forward to working with markets outside Buhera to enable us market our produce and also improve our yields,” Rwenhamo said.

Adjacent to the irrigation project is a gardening scheme which provides food for orphans and widows in the Mutunha community and has profited from the irrigation.

“The irrigation project has not only benefited farmers within the irrigation, it has also provided food for widows and orphans within our community. Some orphans are now able to pay school fees through funds realised from selling vegetables and other crops. This is a result of the solar project unlike in the past were people relied on unpredictable rains,” said Oliver Makuyana, a traditional leader in the area.

The irrigation project is increasingly improving food security, livelihoods and economic opportunities of the Mutunha community. The arable land provide more predictable yields and a more diverse diet, and the scheme has opened new business opportunities for some farmers.

The farmers grow a wide range of crops, from butternuts, maize, cucumbers, sugar beans and tomatoes. But erratic rain patterns, characterised by increasingly longer periods of droughts, are having a disastrous effect on food production and on the livelihoods of those dependent on agriculture.

BUHERA - For many years, farmers in Mutunha community in central Buhera district struggled to make a living due to persistent climate change induced droughts that have become a permanent feature. With climate change increasingly taking its toll on Zimbabwe...
Share via
x
More Information