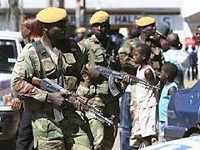 ZIMBABWE – Tension is mounting within the ranks of the armed forces over the non-payment of bonuses despite promises from various cabinet ministers that members of the national army will get their 13th cheque in November.

Failure to pay the bonuses also comes on the backdrop of serious clashes between Finance minister Patrick Chinamasa and President Robert Mugabe in April this year when the President reversed the minister’s announcement that government will not be able to pay bonuses to its strong workforce of close to 500 000 for 2015 and 2016.

Sources in the military said they were informed that bonuses were to be included in their November salaries, but this did not materialise.

“We received our salaries on November 13 and our authorities had assured us that we were to get our bonuses, but up to now nothing has come and we are already in another month,” said the source.

“Soon after our payday, we were told that the next Thursday (November 19) our bonuses will be deposited, but nothing has happened,” said the source adding, “We do not even have payslips for November because they were never handed out.”

Sources also said no communication has been made to inform the soldiers when their bonuses will be paid.

“We have since sent our representatives to go and find out when we are going to get our bonuses and our payslips,” the source said.

Government officials recently said the payment of civil servants’ bonuses would be staggered with the last batch getting the 13th cheque in January 2016, but analysts doubt the government has the financial muscle to honour Mugabe’s pledge.

Early last month, Public Service minister Prisca Mupfumira also assured the civil servants that they would get their bonuses.

“Nothing has changed from the statement made by His Excellency, President Mugabe, in April; we stand guided by that.

“Yes, we are facing financial problems, but we have to work out ways of making sure that our workers smile,” Mupfumira told state media.

Mupfumira said government would first pay the army and the police.

“The uniformed forces will get their bonuses in November. For the other civil servants, the proposal is that we stagger payment because we don’t have the money to pay everyone at once.”

However, it has been close to a month since members of the national army were paid their November salaries without bonuses.

In April this year Chinamasa announced that there would be no bonuses for civil servants for 2015 and 2016 because the government was trying to reduce spending so as to revive the comatose economy.

He said the decision would be reviewed in the 2017 national budget.

Mugabe said it was never agreed by his cabinet, and he arbitrarily pledged to pay the bonuses for civil servants despite clear signs the state does not have cash for its day-to-day operations, including meeting its huge salaries bill for the bloated civil services.

In an interview on Tuesday at the airport where Mugabe and senior government officials had come to welcome visiting Chinese President Xi Jinping, Chinamasa refuse.

ZIMBABWE - Tension is mounting within the ranks of the armed forces over the non-payment of bonuses despite promises from various cabinet ministers that members of the national army will get their 13th cheque in November. This reflects the deepening fi...
Share via
x
More Information