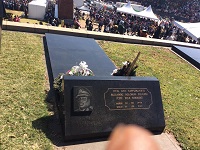 ZIMBABWE – As emotions continue to boil over the disputed circumstances surrounding the death of liberation struggle icon General Solomon Mujuru, whose charred remains were found after a  suspicious fire in 2011, his elder brother Joel say Solomon Mujuru’s name – whose liberation struggle nom de guerre was Rex Nhongo who has almost become a four-letter word within the post-congress Zanu-PF will confront his killers.

“Asi haatadze kuuya kuzobvunza munhu akamuuraya (He will not fail to confront his killers). Manyangarara arikuitika mavhirovhiro ekuti zvichabuda pachena chete (All the nonsense that is taking place in Zimbabwe shows that some people are being haunted by his death and the truth will come out).

“This issue will not end until we get to the bottom of it. Why talk about Solomon today? Solomon will confront his killers one day even before the second coming of Jesus Christ. He will ask them, ‘why did you kill me?’,” Joel said.

“Even if the whole Mujuru family is wiped out, the truth will come out. Zimbabwe haina mwana akachemwa kunge Solomon (No hero has been mourned in Zimbabwe like Solomon was). Munhu akauraya Solomon zvichabuda zvese (Solomon’s killer will be exposed),” he added.

Joel said the Mujuru family was angry and “in a state of confusion” as to what Zanu-PF was seeking to achieve through its continued vilification of their departed son.

Joel’s pronouncements come at a time that emotions are boiling over again within Zanu-PF regarding the circumstances surrounding Gen Mujuru’s death, as well as the post-congress Zanu-PF’s continued desecration of his name.

Mugabe mends fances with army, invites them to bash

Solomon Mujuru will confront his killers, says his brother

ZIMBABWE - As emotions continue to boil over the disputed circumstances surrounding the death of liberation struggle icon General Solomon Mujuru, whose charred remains were found after a  suspicious fire in 2011, his elder brother Joel say Solomon Mujuru...
Share via
x
More Information
x