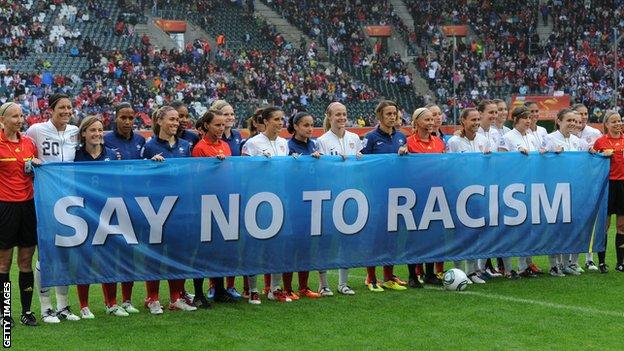 Sportswomen say no to racism

The cricket world witnessed a shameful moment as the 3rd test between Australia and India was halted for 10 minutes after some racial abuse from fans aimed at Indian players.

The suspected fans were ejected from the stadium by police in order to give passage to match proceedings. Cricket Australia immediately launched an investigation that has received full support from the cricket governing body.

While sport has been globally viewed as the glue to people of different race, nationalities and culture, this has been questioned due to the different acts by some fans.

In football most players still take a knee before the match as a sign against racism.

The question remains as to whether it should be seen as simply social injustice or an offence worthy of greater punishments? If offenders were punished in a manner to make a statement, it would see a quick fall in cases of racial abuse.

The abuse comes as a big tormenting factor on athletes’ confidence hence an affected performance. On the other hand athletes should remain united and speak against racism.

It was a much needed break from Premier League pressure as Chelsea got back to winning ways after thrashing Morecambe 4-0 in an FA Cup tie.

Lampard put on a solid first eleven as he looked to build the squad’s confidence given a win against Morecambe.

The win will boost Chelsea going into their encounter against Fulham. Lampard’s big money signings in Werner and Haverts will be eager for more goals after finding the net in the win.

Chelsea have this season proven they have quality but tactical decisions from the gaffer and character within the squad remains questionable.

This win will come as something to build on and give Lampard room to see his lethal weapons going forward.

Manchester City for the title this season.

The blues of Manchester saw a dismal start to the season which was worsened with corona virus cases within the squad.

Pep has done well to get his team back in form and has commended summer signing Dias as a ‘crucial part of the squad going forward’.

The Citizens have gone back to their form of two seasons ago that won them back to back league titles.

With two games in hand, the Citizens will be looking to win them to go within a point of joint leaders, Liverpool and Manchester United. However the much anticipated Champions League title will be more crucial to the City cabinet.

This squad possess a greater threat to the defending champions Liverpool who are facing the worst injury crisis since the arrival of Klopp.

The citizens are welcoming their players from Corona Virus Isolation and a full inform squad can give a stiffer title race.

by Donald Muza Racism is sport. The cricket world witnessed a shameful moment as the 3rd test between Australia and India was halted for 10 minutes after some racial abuse from fans aimed at Indian players. The suspected fans were ejected from the stadium ...
Share via
x
More Information
x