ZIMBABWE – Kariba based Remnant Church pastor Patrick Mugadza has called on President Robert Mugabe to step-aside and allow for an interim authority to run Zimbabwe.

Mugadza was arrested in Victoria Falls on December 11 after reportedly taking advantage of the Zanu PF annual conference to stage a one-man-protest against Mugabe’s ruinous policies.

He told journalists at a press briefing in Harare Tuesday that more man-of-the-cloth must speak out.

The politics of this nation has let the country down. Never criticize anything when you do not have an alternative. said the cleric.

When I started this it was to say there is a way out and as I see it the way out is a government of technocrats, an interim government that will focus on turning around this economy.

That is my suggestion as a solution to our problems.

Mugadza claimed he had attended a conference by United Family International Church (UFIC) leader Emmanuel Makandiwa in Johannesburg last year at which the televangelist called for a similar structure as a solution to Zimbabwe’s crisis.

I think a lot of men of God out there who I think should now come out and speak. They know what is happening and should speak, he said.

I attended a conference in Johannesburg in South Africa last year at which Prophet Makandiwa said the only solution to our problems is when we have a businessman ruling the nation. As a result, I think he is in support of a government of technocrats.

I would want to urge him and other, they have massive support and if they stand up and begin to speak it will make a difference.

It was not supposed to be me who is speaking on this but when those that are supposed to do or say something fail to then God raises someone else.

Asked if he did not fear for his life given the fact that early last year journalist-cum-democracy activist Itai Dzamara disappeared without trace after allegedly being abducted by state agents, Mugabe said he was in fact inspired by the scribe.

Fear has gotten us to where we are. Dzamara, whether he just disappeared or died, he was a seed and many Dzamaras will come up if I disappear.

The President (Mugabe) and many other nationalists sacrificed their lives because they were not afraid of the Smith regime.

We are talking about people who are serious who will not focus much on politics but preferably non-politicians who will make sure this nation is lifted up.

He added: â€œMy family is fearfully supportive and my wife is aware and normally tells me what is going to happen and what I will be planning before I even embark on it.

The fact that civil servants were not paid their salaries and bonuses in December is a sign that things are not good.

Zimbabweans are bewitched; they know the state of the situation but seem blind to it. It is a spirit which blinds people and makes them afraid.

They then see this very bad situation as normal. 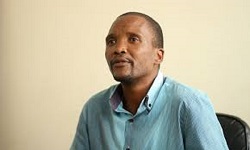 Step down and allow for an interim authority-cleric tells Mugabe

ZIMBABWE - Kariba based Remnant Church pastor Patrick Mugadza has called on President Robert Mugabe to step-aside and allow for an interim authority to run Zimbabwe. Mugadza was arrested in Victoria Falls on December 11 after reportedly taking advantage of...
Share via
x
More Information
x