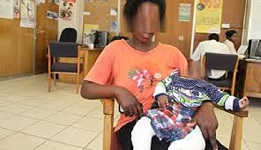 ZIMBABWE – Patience Sithole, 32, of St Mary’s, Chitungwiza is a mother to three children, two of them having born with disability.

As a result of the disability, Patience has been rejected by her two husbands, her crime being, she gave birth to children with disability.

She has had to toil to fend for her children who also continue to face exclusion from the society.

“My first child has Down syndrome while the third one has cerebral palsy. Both the two fathers of these children left me because they think it is my entire fault that I give birth to such children.

“They all blamed me for giving birth to children with disability.

“The third birth was even worse because the father disappeared as soon as he came to hospital to see the child, I never saw him again,” chronicles Patients.

The cobra vendor who sometimes relies on handouts to sustain the family says society has also failed to accept her as she finds it difficult in most cases to interact or let alone to get a place to stay.

“I’m even stigmatised and people won’t let me handle their food at public functions like funerals or weddings because I have children with disability,” adds Patients.

“The moment I mention that I have children with disabilities when I’m looking for a house, the landlord changes his or her mind and shifts goal posts even when they had earlier indicated that the accommodation was available.

“It’s as if I would be looking for free accommodation while just like any other tenant, I pay for the place. The only reason is that I have children with disability.

The 32-year-old chronicles the agony she has been through in life following the birth of the two but however thanks God for them.

“Life has not been easy for me but I have learnt to accept that portion God gave me. I love my children and I would trade them for anything. I love these two more (the ones with disabilities) because of the expulsion they continue to face in the society.

“All the two births have been followed by misery, at a time when I was supposed to be celebrating life; I was facing rejection and had to ponder on my next move after the birth.

“Every birth meant rejection first from my husband then family. When God blessed me with second child, who doesn’t have a disability, I thanked him for the comfort.

“Ndakati Mwari mandinyaradza. Whatever I have been through, I have still leant to count all my blessings and know life is from God,” she says.

Patience thank the Zimbabwe Parents of Handicapped Children Association chapter in Chitungwiza that has helped her with psychological support.

“I thank the mothers who are part of that group for the support they have given me. They have surely kept me going; they are like family to me.

“We have shared experiences and they stick closer than family,” she adds.

Although there are no available statistics for the condition in the country, Cerebral palsy is described as a disorder affecting muscle, movement and the ability to move in coordinated and purposeful way.

The condition remain unknown in the country with the children affected facing all forms of expulsion.

“They is need to raise awareness about cerebral palsy and to motivate efforts aimed at ensuring that persons with the condition have the same access to the basic needs of life and opportunities as anyone else.

“Services for rehabilitation are not available in hospitals yet most children born with the condition have difficulties with movement, affecting one or both arms and these people have difficulties in eating doing any daily activities.

“There is need for increased access to health and rehabilitation and other services and that persons with cerebral palsy should have a voice of their own,” he said.

Dr Moyo said the condition was caused due to complications at birth affecting the child’s posture with nerves being affected.

“It is a common physical disability in children marked by impaired muscle coordination (spastic paralysis and other disabilities caused by damage to the brain before or at birth,” he added.

Children with cerebral palsy face multiple bio-psychosocial challenges which are worsened by the fact that the situation is a lifetime condition which also affects their health and health-related quality of life.

Patience and many children with CP in Zimbabwe and worldwide face similar challenges daily while very little has been done in the country to make life bearable for people living with disabilities.

She hopes that the country could do more so that her children and many others in the same predicament could also find it easier to access basic services.

“I pray that the Government continues to prioritise children with disabilities so that they could also enjoy life just like their peers.

“I also call upon the society to stop the stigma and do the least they can to make life bearable. It is not by choice that I have these children and this could happen to any mother,” she says while cuddling her baby.

ZIMBABWE - Patience Sithole, 32, of St Mary’s, Chitungwiza is a mother to three children, two of them having born with disability. As a result of the disability, Patience has been rejected by her two husbands, her crime being, she gave birth to children ...
Share via
x
More Information