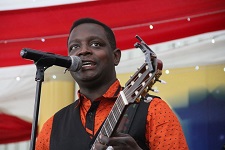 ZIMBABWE – The 33-year-old crooner, who enjoys rave reviews with his latest singles compilation album Macamaradha, has decided to meet Hararians with a special show at The Vault (formerly Book Cafe) this FRIDAY.

Speaking through his publicist Joe “Local” Nyamungoma, the Orchestra Mberikwazvo camp said they were ready for the special night of fun.

“Sulu has a soft spot for this newly opened joint as he used to hold a sold out gigs when it was still called Book Cafe.

“For the benefit of old  and new fans who were regulars at the same joint, we urge them to show up in numbers as the place has been spruced up,” Nyamungoma.

“This show is a bit special for us as it comes at a time when our singles are gathering momentum.

“Being the generous crooner he is, Sulu will be giving away a number of goodies to fans who have always rallied behind him over the years.

“We also feel humbled being associated with Boss Spencer, the joint proprietor who has been there for us in our circles.

“He is a fine gentleman who has brought a new market to upmarket showbiz. And being the first band to play there in 2016, we do promise nothing but the best when we take to the stage.”

The Orchestra Dendera Kings boss along with his outfit is known for his well choreographed act where they perform, which has endeared them with fans.

ZIMBABWE - The 33-year-old crooner, who enjoys rave reviews with his latest singles compilation album Macamaradha, has decided to meet Hararians with a special show at The Vault (formerly Book Cafe) this FRIDAY. Speaking through his publicist Joe “Local...
Share via
x
More Information