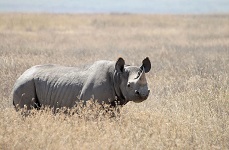 ZIMBABWE – A significant surge in rhino poaching in Zimbabwe in 2015 saw at least 50 rhino poached, more than double the figure lost the previous year, a conservation group has reported.

Forty-two of the rhino lost last year were black rhino, said the Lowveld Rhino Trust in a statement. Only around 20 rhino were lost to poachers in Zimbabwe in 2014, according to the trust.

Although there were some rhino births recorded in 2014, the increase in deaths mean that Zimbabwe’s total population of white and black rhino has dropped to around 800 from just above 800 in 2014.

Most of the rhino were lost in Zimbabwe’s Lowveld area in the south of the country, where the rhino population is considered particularly valuable.

Said the trust: “The majority of losses were suffered in the region that contains the only Zimbabwe populations that are regarded by IUCN [World Conservation Union] as being genetically and demographically viable – the Lowveld Conservancies.”

The figures come as state media reported on the arrest of four men in the Matopos National Park near the second city of Bulawayo for allegedly tracking a rhino in the park.

The Herald newspaper said on Friday that investigations were continuing into exactly what the four were doing inside the park. So far the group has only been charged with criminal trespass, according to the report.

Their lawyer says they were on their way to buy a car in the nearby Gulati communal lands when they saw animal tracks and decided to follow them out of interest.

The newspaper said that they were arrested on Tuesday by rangers and then handed over to police in a move that shows the Zimbabwe authorities’ apparent determination to clamp down on rhino poaching.

A rhino poacher was handed a record 35-year jail sentence by a magistrate in Masvingo on New Year’s Eve in a move welcomed by conservationists.

The Lowveld Rhino Trust said the man, named by the press as Tawengwa Machona, was a “hard-core” poacher.

ZIMBABWE - A significant surge in rhino poaching in Zimbabwe in 2015 saw at least 50 rhino poached, more than double the figure lost the previous year, a conservation group has reported. Forty-two of the rhino lost last year were black rhino, said the Lowv...
Share via
x
More Information