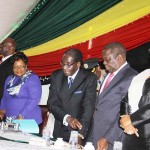 ZIMBABWE – Opposition MDC-T leader Morgan Tsvangirai has said it is ironic that President Robert Mugabe is forcing younger and energetic aides such as former deputy Joice Mujuru into retirement while he carries on.

The former premier said Mugabe, now aged 91 and reportedly struggling with poor health, should take a deserved rest and enjoy his pension.

Tsvangirai said this while addressing thousands of supporters and mourners in Wedza Saturday at the burial of Harare deputy mayor, Thomas Muzuva, who died on Wednesday.

“There are people who are 90 something but they fire someone who is 60 years.

That is a serious contradiction; the young must fight while the old take a rest,” said Tsvangirai.

Mugabe fired Mujuru last year, accusing her of plotting his ouster from power.

The former vice president is reportedly working on a possible coalition with Tsvangirai to take on Mugabe at the next elections which are scheduled for 2018.

Meanwhile, regarding the late Harare deputy mayor, the MDC-T leader said: “Those who are good go first.

It’s a pity for the country that only murderers and thieves remain behind. It’s sad to lose future leaders of this movement.

The former premier added that the number of mourners gathered at Muzuva’s homestead was a testimony he was a “true national hero who fought for change on behalf of Zimbabweans.

Tsvangirai said genuine heroes did not need Mugabe to honour them with national hero status and burial at the Heroes Acre in Harare.

You don’t need a whole President of the country to announce via the press that so and so is a hero.

The multitudes of people gathered here is a true testimony of the late Muzuva’s work for both the party and the country.