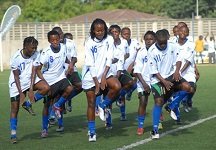 ZIMBABWE – The national women soccer team, ‘Twiga Stars’, received a major boost ahead of their battle against Zimbabwe 2016 Women Africa Cup of Nations qualifiers, with 15m/- reward on table from the government.

Twiga Stars will face Zimbabwe’s ‘Mighty Warriors’ challenge in their first round encounter of the qualifiers this Friday at the Azam Complex in Chamazi in Dar es Salaam.

Ahead of the match, the Assistant Minister for Information, Culture, Arts and Sports, Annastazia Wambura, visited the team’s camp in Dar es Salaam yesterday, promising the government’s full support.

Speaking with players, Wambura said the government together with stakeholders have collected 15m/-, which is available to motivate players.

She said if the team registers victory, each player will be awarded 300,000/-. She used the occasion to call on the public to continue supporting the team and flock the venue in their numbers.

The Tanzania Football Federation (TFF) General Secretary, Selestine Mwesigwa, thanked the government and stakeholders for their support, saying it was timely and will to a great extent help motivate players.

‘Twiga Stars’ coach, Nasra Juma, has declared her charges readiness to kick off qualifiers campaign on a sound note. The coach is calling for fans to turn out in huge numbers to support their team.

Twiga Stars have been in an intensive training for the past one month to get ready for the match and coach Nasra is confident they will register positive result.

Her confidence is based on the time players spent together in camp and drills that the team went through, saying it was enough to help them record positive results at home and put the team in comfortable position to sail through into the next stage of the qualifier.

Coach Nasra said that her injury free squad is proceeding well with preparations and ready to take on their opponents.

“Our camp is in great shape and players’ spirit is high. Thank God that all players are fit and ready for battle… our target is to hit the ground running by winning at home and be in a good position to knock them off,” she said.

The tactician urged soccer stakeholders in the country to flock Azam Complex to rally behind their team in their first leg match of the first round of the qualifiers.

Nasra replaced Rogasian Kaijage, who decided to step down from the post. Twiga Stars and Zimbabwe will battle it out for the finals ticket of the event, which will be staged in Cameroon from November 19 to December 3 this year.

The match will be officiated by Lidya Tafesse from Ethiopia and she will be assisted by Yehuzewdubizua Yehuw and Tsige Sisay also from Ethiopia.

The fourth official will be Woinshet Kassaye Abera also from Ethiopia, while match commissioner is Genevieve Kanjika from the Democratic Republic of Congo (DRC). The return leg March will be held in Zimbabwe on March 18, 19 or 20.

If Twiga Stars manage to eliminate the Zimbabwe’s Mighty Warriors, they will face winner of the match between Zambia ‘Shepolopolo’ and Namibia in the first leg match scheduled to be played on April 8, 9 or 10, while the return leg will be held on April 22, 23 or 24.

TFF Media Officer, Baraka Kizuguto said the officers are expected to arrive in Dar es Salaam tomorrow ready to take charge of the match. In another development, the Tanzania Football Federation (TFF) has announced entrance fee for the Friday’s match between Twiga Stars and Zimbabwe Mighty Warrior, as 3,000/- and 2,000/- respectively.

The Zimbabwe women’s national team is expected to jet in tomorrow afternoon in readiness for the encounter. The Mighty Warriors have also declared their readiness for the qualifiers challenges which they will as well utilize as part of their preparation for the Rio Olympic Games in August.

Zimbabwe’s game against Tanzania’s Twiga Stars is the first competitive game since qualifying with a victory over Cameroon last October.

Impressive Fight Back From The Warriors

Ireland to travel to Zimbabwe next month for one-day series

ZIMBABWE - The national women soccer team, 'Twiga Stars', received a major boost ahead of their battle against Zimbabwe 2016 Women Africa Cup of Nations qualifiers, with 15m/- reward on table from the government. Twiga Stars will face Zimbabwe's 'Might...
Share via
x
More Information
x