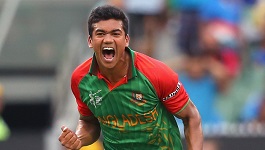 ZIMBABWE – Bangladesh fast bowler Taskin Ahmed has said that he is fit for the ODI and T20 series against Zimbabwe next month. He bowled in the Bangladesh nets at full pelt, leaving him quietly confident of returning to the senior side for the first time since June 21. Taskin is one of the 18 players in the preliminary squad for the Zimbabwe series starting on November 7.

Eleven of the players turned up for training on Thursday since six will travel back to the country from South Africa on Friday as part of the A side and Shakib Al Hasan is expected to arrive from the USA on Saturday evening.

Taskin suffered a tear on his left side during Bangladesh’s second ODI against India in June. He recovered and was sent to India with the Bangladesh A squad but after five overs in the first game on September 16, suffered the same injury and returned home from Bangalore the next day.

“There aren’t any problems now,” Taskin said. “I bowled with full effort on Wednesday and today so I am hoping there won’t be any problems ahead too. I could bowl with my usual pace. I didn’t complain to the physio. I will be more confident if I can bowl like this in the next couple of days.

“I am confident that since I am free of injury and I don’t feel pain while bowling, I will do well if I get an opportunity to play.”

He may, however, be chosen for only one of the formats against Zimbabwe, so as to not put pressure on his body, which has been susceptible to major injuries in the past.

Taskin felt he had hurried his return from the side injury in June, which caused a relapse in India.

“I didn’t recover fully and had put myself under pressure. But now I have worked hard on my rehabilitation in the past five weeks. I have found rhythm in my bowling too.”