ZIMBABWE – The Zimbabwe Revenue Authority has written letters to several churches demanding information which it intends to use to calculate how much tax they owe, as moves gather momentum to ensure churches pay taxes for the first time.

Investigations by The Herald revealed that a number of churches were in possession of the letter demanding a list of financial documents to assess and come up with the figures owing in tax arrears.

This came at a time when Zimra has raided churches like the Apostolic Faith Mission in Zimbabwe’s accounts for not complying with paying taxes.

On September 24, 2015, Zimra wrote a letter to Prophet Emmanuel Makandiwa’s United Family International Church, demanding some financial documents and other papers relevant for the taxing exercise.

In terms of the letter signed by Zimra manager (domestic Taxes) for its Regional One, Mr E Tafireyi, UFIC was asked to produce the following:

1 A listing of all associated companies.

3 Summarised monthly cash book for the year 2012 to date.

10 Asset registers including those for associated companies

12 Name and addresses of the shareholders including for all associated and related companies.

Sources said the same letter was written to several other churches.

According to the letter, Zimra wanted its two investigating officers J Mutezo and T Mandiona to access the requested documents for the authority’s verification exercise.

“Messrs J Mutezo and T Mandiona are Zimra officers authorised to carry out a verification on the tax affairs of UFIC for period January 1 2012 to date,” read the letter.

The Herald understands that several pentecostal churches were under probe for tax evasion, although Zimra commissioner general Mr Gershem Pasi is on record saying the commission was still working on a legislative framework on taxing churches.

Zimra spokesperson Mr Canisius Mudzimu refused to comment on the matter and ignored questions sent to him two days ago despite several follow-ups made.

The Herald understands that some AFM in Zimbabwe churches in areas like Kwekwe and Karoi have been taxed in excess of $100 000 and had their accounts garnished.

Sources said Zimra officials would disguise as church members and check on the monies contributed during services.

Zimra is reportedly tracking the churches from the imported vehicles that have some exemption, down to the pastors’ rented houses in a bid to come up with an appropriate tax.

Some churches announce the total offerings at the end of the each session and tithes raised, the evidence that may be used by the taxman in arriving at figures owing in tax.

Last month, Zimra reportedly raided Prophet Walter Magaya’s Prophetic Healing and Deliverance Ministries, probing the church over numerous donations that had been done to the needy.

“We are now focusing on them (churches) and we have engaged them, we are setting parameters,” he said.

“We don’t care how they make their money and come November, we will be through with our legislative proposals to the minister (of Finance and Economic Development Patrick Chinamasa), which will tighten that area because we have seen loopholes there. They are not immune to taxation.” 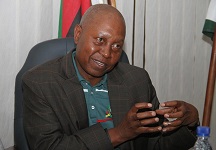 Taxman moves in on churches

ZIMBABWE - The Zimbabwe Revenue Authority has written letters to several churches demanding information which it intends to use to calculate how much tax they owe, as moves gather momentum to ensure churches pay taxes for the first time. Investigations by ...
Share via
x
More Information
x