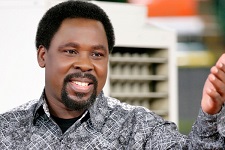 The world-famous Nigerian prophet focused his attention on Zimbabwe, praying for the country and its president in a tele-broadcast to thousands of worshippers who thronged the Prophetic Healing and Deliverance (PHD) Ministries Night of Turnaround 4 on Friday night.

TB Joshua is PHD founder Walter Magaya’s spiritual father. He made a telephone call to “his son” on Friday night to wish him a happy birthday and pronounce “good news” to thousands of congregants who included Cabinet ministers, legislators, diplomats and traditional leaders from the region.

As he was speaking, the congregation was in prayer, down on their knees and as soon as the call ended, Magaya slumped onto the pulpit, sobbing with his face down before he raised his head to declare that “you will not go back home the same. This is your day! The General of God has said so and just believe,” he said, before advising congregants to write their prayer requests on the envelopes in which they would give their offerings.

The mega all-night prayer drew congregants from as far as Ethiopia, Zambia, Tanzania, South Africa and Botswana, among many other countries.

Last week the charismatic preacher was in Nigeria where he “interceded” for the Turnaround 4, which is now an annual event for PHD Ministries.

Magaya told journalists during the all-night prayer that while he was preaching, a team of intercessors was also praying for the event in Lagos at the Synagogue Church of All Nations.

“Before this event, I was in Nigeria where I met my spiritual father Prophet TB Joshua. He prayed for this event and indeed it’s going to be a night of turnaround. He wished me well and I feel challenged,” he said.