Teachers forced to pay towards Mugabe’s US $800000 birthday party 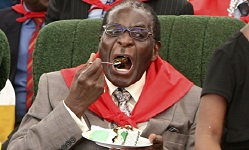 ZIMBABWE – A Zanu PF fund raising committee is forcing all teachers in Masvingo to contribute $7 each towards President Robert Mugabe’s birthday party to be held in the province later this month.

The alleged directive has angered teachers’ unions who described the ruling party as an extortionist organisation, milking the same workforce it is struggling to pay.

The ruling party is planning to spend at least $800,000 celebrating Mugabe’s birthday.

The veteran leader turns 92 on the 21st of this month, but the milestone will be celebrated in Masvingo on the 28th of February.

Progressive Teachers Union of Zimbabwe (PTUZ) president, Takavafira Zhou, confirmed that teachers had been told to help pay for the celebrations.

He said the union has written to the minister of primary and secondary Education in bid to exempt the teachers from paying for the event.

Zhou said the directive for teachers to pay was communicated to all headmasters by District Education Officers.

The province is said to have over 15,000 teachers.

“We have received reports from all the districts within Masvingo that teachers have been ordered to pay a maximum of $7 each towards President Mugabe’s birthday party,” said Zhou.

“Teachers should pay the money on voluntary bases not this extortionist tendency which is being exhibited by Zanu PF, the same party that has oppressed Zimbabweans since independence.

“We strongly commend our members to desist from paying that money until a time the teaching profession is well remunerated,” he said.

Zanu PF provincial chairman Ezra Chadazamira however, professed ignorance over the $7 demand when contacted for comment saying he could not say more as he was in a meeting.

The lavish birthday celebrations come at time hunger is ravaging all corners of Masvingo province, with critics arguing that the money to be spent on the day should be channeled towards feeding thousands of villagers who are sleeping hungry.

Opposition parties have also called on Mugabe to cancel the celebrations and use the money to import grain to help ease hunger after a severe drought.

Teachers forced to pay towards Mugabe's US $800000 birthday party

ZIMBABWE - A Zanu PF fund raising committee is forcing all teachers in Masvingo to contribute $7 each towards President Robert Mugabe's birthday party to be held in the province later this month. The alleged directive has angered teachers' unions who des...
Share via
x
More Information