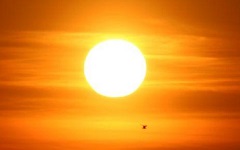 ZIMBABWE – Zimbabwe yesterday started experiencing a heat wave with most parts of the country recording a surge in temperatures.

According to weather reports, low-lying areas such as Kariba, Chiredzi, Binga and Beitbridge had temperatures ranging between 35 and 40˚C.

In Harare and Gweru, temperatures averaged 32˚C, while in Bulawayo they were around 34˚C, the same as Masvingo.

Among the major cities and towns, only Mutare experienced slightly cooler temperatures of around 30˚C.

The Meteorological Services Department (MSD) on Friday warned that different parts of the country would experience high temperatures of between 35 and 45˚C starting yesterday until next weekend.

“Daytime temperatures over the country are expected to range between 35˚c and 43˚C, peaking to as high as 45˚C in low-lying areas. Places like Kariba, Beitbridge, Chiredzi and Binga are likely to suffer the most,” said the MSD statement

“The temperatures are expected to go down slightly in the Lowveld (by 2˚C to 3˚C on Monday, but thereafter should increase again from Friday next week.”

The Ministry of Health and Child Care has since warned people to take precautionary measures against the heat wave affecting the country, including drinking a lot of liquids to avoid health complications.