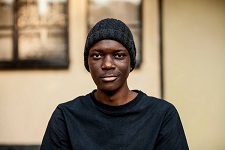 ZIMBABWE – The late Takudzwa Paradza was laid to rest last Saturday at Glen Forest cemetery following the arrival of his body from India.

People from all walks of life braved the scorching sun to pay their last respects to the 20-year-old who succumbed to Non-Hodgkin’s’ Lymphoma cancer in India after a one-year battle.

His family thanked everyone for having stood by their side from the time Taku was diagnosed with cancer in September 2014 until his death.

“People have showed me love. You all helped us raise money for Taku’s treatment and ensured that we went to India where he answered God’s call.

“He was my only son and my heart is torn yet it is the love that you all showed me that keeps me going. I have never met most of you but you answered the call to help save my son,” said Maria, the late Taku’s mother.

Taku has been receiving treatment at HCG Tower hospital, Bangalore since July and was in the company of his mother.

He had had several sessions of chemotherapy before leaving for India where he was supposed to have an Autologous Bone Marrow Transplant done.

The cancer had been so aggressive such that it had spread to his brain in a very short space of time.

An Allogenic Bone Marrow Transplant was then recommended after doctors had concluded that he was too frail to be his own donor.

The Allogenic meant that he needed a donor and in a bid to save her only sibling, his sister Varaidzo early August flew to India as doctors wanted to see if she could be a matching donor unfortunately the two failed to match.

Taku was currently waiting for a potential donor while he was receiving treatment as his condition had deteriorated while in India.

Non-Hodgkin’s lymphoma is a cancer of the immune system cells (lymphocytes). In the USA it is the sixth most common cancer.  According to a local doctor, it Rates higher in Zimbabwe especially with the advent of HIV. Prognosis depends on the stage of disease at diagnosis.

Why former Vice President Mujuru should accept her presidential pension

The arrival of the body of Late Tukudzwa from Inida

ZIMBABWE - The late Takudzwa Paradza was laid to rest last Saturday at Glen Forest cemetery following the arrival of his body from India. People from all walks of life braved the scorching sun to pay their last respects to the 20-year-old who succumbed to ...
Share via
x
More Information
x