The crocodile that Sheds a tear 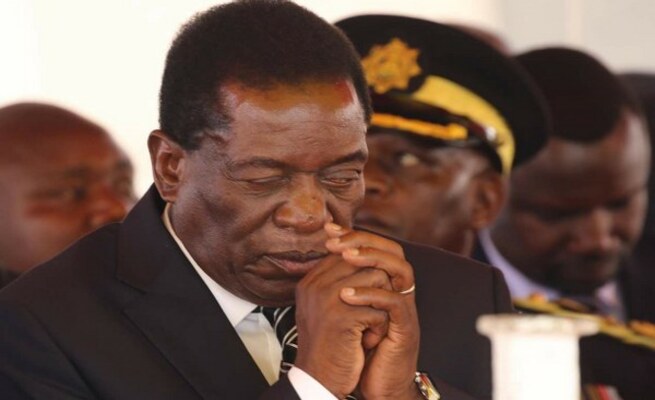 Emmerson Dambudzo Mnangagwa is the President of Zimbabwe – whether we like it or not.Well, the Constitutional Court declared him the winner of the highly contested 2018 Presidential election. By how much, well that information remains a mystery to date. Even ZEC fails to explain what exactly happened in that election.

Funny enough, that team, that failed to numerically evaluate the outcomes of the last election has to conduct another election in under 24 months.

Even before he was sworn in, blood was flowing on the streets, with soldiers claiming to be shooting at a 45° angle, leaving 6 dead, many others with gunshot wounds, and others the trauma of that dark day.

A commission of enquiry was put in place, whose recommendations where ignored – mostly because it was constituted in a failed bid to look like there was political will to resolve the problem.

Fast forward to a few months later and a new year, more bodies on the street as chaos rocked the nation. Door to door assault campaign ensued hot on the heels. This was the entry into full time Presidency since the November coup which saw Robert Mugabe, the man who oversaw the fall of grace of this great nation, resign in a huff.

It must be hard being Mr Mnangagwa.

There is nothing enviable about being a leader for people who would rather be led by someone else, so I can understand the pressure he must be under to make some things at least work. He realise all talk and no action can no longer fit the status.

The roads rehabilitation is a good initiative. Only God knows how much that was overdue. But people won’t celebrate that – it is a normal routine work in any normal country done by the local authorities. But in Mr Mnangagwa’s government, the whole presidium must be seen to be doing the work! Hoping for some praise, and hopefully turn the people’s hearts to appreciate him.

Thats all there is- he longs to be accepted, to be loved, to be wanted. This is why we see all the theatrics of thousands welcoming him at the airport, the recent so called demonstrations against the alternative leader, Nelson Chamisa, and the so called anti sanctions drive , the violence – these are his few legion of followers trying to please Mr Mnangagwa. Unfortunately, this causes many to repell.

In my other life as a Pastor, I believe that Jesus Christ died for all of us that our sins be forgiven, no matter how grand they may seem – like the Gukurahundi massacres, like the 2008 political violence, like even the death of one person at the instigation of either a complicit government or a vindictive government- -he forgives.

When I see all the talk of mega deals, the attempts to show activity, the busy bodyness of the present government, I feel for them. They are putting an extra effort where any effort has been rejected. So one can imagine the pressure. Trying to be hardworking but the results are opposite the expected outcomes.

So people talk of an inherent violent DNA because at most, the reaction to rejection is bullying, in an attempt to gain control. That tendency becomes even dangerous when the person wields authority. He produces after his kind.

The kind of jokes of persons  that even surround him makes it even more unfortunate. When one reads on social media, it is quite sad, that the spirit of seeking relevance has become embedded. People who can not objectively look at issues and understand the plight of the people.

Zimbabweans are an abused lot and one wonders why mental health issues are becoming the order of the day- those sitting at the helm lack the empathy or compassion to make life enjoyable for anyone except themselves!

So, when it comes to the great crocodile at the helm of our nation’s politics, it is a wounded one, that sheds a tear, yet does not know how to allow anyone to bind its wound up. When people approach it, instead of accepting them, he attacks. Because that’s mostly what he has known.

I would like to read of his life in his autobiography, if anyone can sponsor me one book, to understand his childhood. My concern is we could have a 4 year old stuck in the body of a 79 year old, seeking help. Throwing tantrums becomes the closest form of reaction. And for one who holds the highest position to act so, it mepooransu people get hurt in the process.

So to appease, people must gather and show him love. But because it’s command love, it never gratifies. What a sad scenario. What a tragedy.

But what can be done? ED needs to find himself. He needs to forgive them all, and he needs to apologise for his own act 9 . No need to put a strong face, just be vulnerable and allow peoole to help you.

Some say a victim can be a worst victimiser. My sneaking suspicion is that the President lacks empathy and compassion towards others because he has never received it.

Zimbabwe will flourish once bullying at the highest level is dealt with. The kind of principality hovering around Zimbabwe can only be defeated with love. A leader that loves the self, has an ability to love the next enough to feel for them.

ED needs help, longs to be loved, but his response to love, is violence. His response to straight talks is a scoff – why? Because he does not know any better.

Talks of illegitimacy, lack of development, and suffering of the masses is not what he intends to hear, he want the opposite so that people praise him, but that is not happening, because there is not much to talk about. The economy is spiraling out of control. As much as there are talks of surplus in the budget, the reality on the ground is that prices are going up. Fuel prices are going up every month, the Zimbabwe RTGS continues to fall on the auction platform, the black market hasn’t been dealt with, suicide cases are on the rise, the public health system is not functioning well, everything is literally hanging by the thread. Just that knowledge is enough to send any father into overdrive. When they have a positive view of the self, they will look for other sources of wealth to transform, but when they are negative, they blame it on everyone else, except themselves.

So we begin to hear how the USA President, Joe Biden, smiled at him at a global conference to fight climate change. It wasn’t as easy as he thought, not everyone can be hoodwinked into towing one’s line of thought. It’s equally frustrating to not having anything meaningful to show, let alone say to thousands who welcome you at the airport. But then again, when it comes to the so called sanctions, there is a road map clearly set out that shows how Zimbabwe can come out of them. Respect human rights, respect the dignity of your people, restore confidence in the rule of law and allow institutions to thrive and to be strong without undue interference from politically exposed persons.

I don’t envy Mr Mnangagwa’s position. Any other person would have simply resigned, if they had any empathy left in them, but given his military training and torture under the Rhodesian government, the way he has been groomed within Zanu PF, quashing opposition and creating a generation of heartless youth who would not hesitate to turn on their very own sibling, then surely, all sort of compassion must have been drained from him.

The inauthentic calls for peace, tolerance and fight against corruption have become sound statements with no activity backing it. One wonders how then the people are to take him for his word? Many have chosen to simply ignore politics and try out business, focus on entertainment and make a better living for themselves and their families. We are successfully building an individualistic society. One in which the saying one man for himself and God for us all. Each to his own.

Emmerson Mnangagwa’s legacy is a sad one, if not painful. It is the hope and desire that Zimbabwe rises again. I am sure he wants the same, but perhaps, he doesn’t know how to? Maybe it’s time that he accepts responsibility, and become part of the solution giving generation.

It is indeed impossible to be a hero of two wars. This war is for transformation and development, it needs a new and different approach.

The crocodile that Sheds a tear

By Yvonne Muchaka Emmerson Dambudzo Mnangagwa is the President of Zimbabwe - whether we like it or not.Well, the Constitutional Court declared him the winner of the highly contested 2018 Presidential election. By how much, well that information remains a m...
Share via
x
More Information