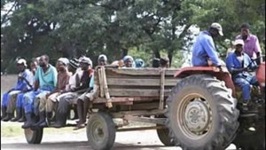 ZIMBABWE – At the start of the plan there were 12 million hectares under private ownership – something like 10 000 title deeds in large scale farming areas and 25 000 in small scale farming areas. In the former there were 4 800 white farmers, 83 per cent of whom had bought their farms for cash after Independence in 1980 and most holding “Certificates of No Interest” as far as the farm and land redistribution programmes were concerned. 1 200 large scale black farmers owned the remainder and all 25 000 small scale (250 ha on average) farms were black owned. The commercial, large scale farmers (black and white) owned and farmed 8 million hectares of land or 16.3 per cent of all land in Zimbabwe. Over 70 per cent of all commercial farmers had acquired their farms with the assistance of the State in the form of a bond from the Land Bank. It is clear from these circumstances that up to 2000 there was no intent on the part of the State to disturb or reform the large scale farming sector.

Within 5 years following the first land invasions in 2000 over 90 per cent of all white commercial farmers had been forcibly and illegally evicted from their farms and homes leaving behind 10 000 farm dams, 260 000 hectares of established irrigation capacity, 25 000 tractors of 65 horse power or more and a great deal of fixed and moveable assets worth a conservative $10 billion dollars. They were all replaced with politically connected individuals or with small holders, all of whom were required to be members of Zanu PF and required to attend all Zanu PF meetings in the area. All MDC structures in these areas were systematically destroyed.

Today only a few hundred commercial farm owners are left on their land. There are perhaps the same number of white farmers who are trying to farm small areas that they lease from the “new farmers”.  The main focus of activity is tobacco and these growers are thought to be producing 60 to 70 thousand tonnes of good quality tobacco that is the cornerstone of the industry. There are a number of dairy farmers, poultry and pig producers and one or two beef cattle farmers.

Agricultural output has declined 80 per cent in both the large scale and the small scale sector. Milk production, for example is down from 250 000 tonnes to 66 000 tonnes, the great majority of food is now being imported. 90 per cent of the farm workforce that existed in 2000 has lost their jobs, been displaced and made destitute. The same fate has affected their employers many of whom are destitute. The decline in the output of the small scale and the Communal Areas is indicative of the fact that a strong beneficial relationship existed between the large scale farmers and their small scale or peasant neighbors.

From a political stand point, since 2000 MDC has been unable to campaign, organise or recruit membership in all commercial farming areas of the country. In successive elections (2002, 2005, 2008 and 2013) Zanu PF has held onto every seat in these areas in sharp contrast to 2000 when the great majority of these seats fell to the MDC leaving Zanu PF with a majority of just three seats in parliament. The Commercial farming areas have become “no go” areas for the MDC and even physical access is difficult and immediately challenged by a strong and permanent military and security presence in these areas.

During the COPAC exercise when the consultation of all areas was conducted by a special Committee of Parliament, it was noted that in all meetings in the former commercial farming Districts, the population was organised and controlled in what it was saying. All meetings were heavily infiltrated and monitored. Any family in these new settlements that expresses support for the MDC in any way is immediately dispossessed and expelled. In these circumstances the MDC has found it impossible to campaign or even supervise electorally in these areas in the past 15 years.

In retrospect it is clear that the “Fast Track Farm Reform Programme” was a politically motivated scheme to secure full control over the political activity of the population on the farms. This has been achieved and is being defended at all costs by Zanu PF who knows that they are otherwise vulnerable in the Tribal and Urban Areas of the country where people are still relatively free to exercise their own political preferences. The collapse of production that has followed the campaign was not anticipated and the Government is now grappling with the problems created by the whole exercise. This includes:

Zanu PF has secured the political goals it set itself in 2000 but at a heavy price in terms of the economic and political cost. There can be no recovery in agriculture until the mistakes made during the programme are attended to and the former commercial farmers compensated – it is estimated that this will involve payments in total of over $10 billion.

In the meantime there are no sign that Zanu PF is even considering what is needed to repair the damage it has done to what was the most progressive and productive agricultural system in Africa. The great majority of the farms are abandoned, derelict and empty. Remaining pockets of commercial agriculture are under constant pressure and face attempts to remove them on a regular basis.

All food aid and the distribution of State Funded inputs are distributed on a political patronage basis with MDC families being told “change your alliances or face starvation”. MDC Councilors, without exception, are denied access to food aid or inputs for the people in their Wards unless it is carried out by Zanu PF affiliated personnel or structures.

The political character of land reform in Zimbabwe