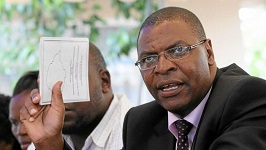 ZIMBABWE – Oftentimes, with a degree of irritating frequency, I have encountered questions in the media asking why we, in the opposition, always mourn about the bad state of Zimbabwe without proffering sustainable alternatives. I am not sure what inspires such uninformed, if not outright mischievous comments. Since 1998, we have dedicated our time, resources, space and unfortunately lives, to offer willing Zimbabweans life outside the myopic governance of a clueless Zanu PF. Our critics have either chosen to ignore wise counsel or simply remained entrenched in their spiteful arrogance. However, I do not want to slide into the “complaints mode”, lest I fall into their trap.WELSHMAN NCUBE

Rather, I want to demonstrate beyond any doubt that we in the MDC have a solid, realisable and deliverable vision of the Zimbabwe we want to build.

Unlike the leader of the ruling party who hopes for “miraculous resurrection” of the economy in 2016, I want to remain grounded in mundane reality, because while miracles still happen, I would not base the future of an entire country on miracles! Let me, at the outset, put up a caveat: a political party that is not in power; not even recognised as “official opposition”, has limited scope within which to effect change unless — as was in the liberation struggle — it applies military options. However, as a party entrenched in grassroots democracy, we have the potential to influence change by agitating our members to engage policymakers at all levels, while participating in public and private advocacy with progressive civil society organisations to build the Zimbabwe we want.

In our scheme of things, there is no situation beyond redemption. Zimbabweans need not look further than elsewhere in Africa to prove that life can be good — only if government is in the hands of a responsible, respectful and people-sensitive political party. As we see in Burundi, Libya and Zimbabwe, bad politics contaminates potentially good economics. I have seen for myself that the politics in Mauritius and Botswana has been responsible for making those two countries some of the best to live in on the continent. If I were a political software engineer, I would simply write an application based on the standards of governance in those two countries, cut and paste!

As MDC, we insist on a Zimbabwe that respects constitutionalism and adheres to all constitutional provisions. We cannot afford to be a constitutional democracy only in theory. Every citizen must not only be respected, but also allowed to participate, freely, at all levels of governance. In fact, the MDC wants a situation where, at ward level, citizens can take decisions relating to their education, business, housing, water, food security, health and sport — through the guidance of a freely elected and representative councillor. Local authority becomes the life-blood of citizen life. At this level, all services — water, education, electricity, health, food — must not only be accessible but also affordable and offered in a clean, sustainable, “green” environment. While still at this level of governance, we want a Zimbabwe where chiefs and headmen serve everyone without pursuing a political party agenda. In our type of Zimbabwe, chiefs are the heartbeat of citizenry, not some human mutton cloth swung from one end to another at the whim of ruling parties.

At national level, we see a government that is a result of a truly democratic process, where members of Parliament have been elected in a truly free, fair and just environment. A Zimbabwe where all electoral institutions are well-resourced, non-partisan, run by citizens who are professionals dedicated to the cause of everyone, independently, without fear or favour. What then this means is that the constitution is not only superior, but all powers are separate while Parliament acts independently to provide oversight and the Judiciary independently pursues justice for everyone under the same law.

The effects of such a near perfect democracy create an environment where citizens exercise their economic freedom to the maximum. Those who are courageous enough to invest produce goods and services freely traded in an open market. As they accumulate their wealth, the State benefits from fair taxes, which are channelled not only to infrastructure, but also to support those members of our society who are disadvantaged. Such a system of an environment conducive to entrepreneurial self-expressions produces local conglomerates and SMEs that create jobs for all able-bodied citizens. The middle class expands rapidly, consuming locally-produced goods in bulk, thus triggering a productive cycle that not only expands the country’s Gross Domestic Product, but also enhances the quality of life. The same citizenry is capable of demanding its social and political rights, participating in governance and calling the government to account, where necessary, using an independent, free and accountably vibrant media.

MDC can build a Zimbabwe run by a small efficient government manned by a professional civil service in an environment of utmost peace and stability where the small army is a friend of the citizens. We can build a Zimbabwe with just enough police to secure the confidence of law-abiding citizens, a few of which, if in prison, benefit from centres of social rehabilitation, not torture, starvation and vengeance.

Since a responsible MDC will have deployed public resources intelligently, the sophisticated public infrastructure becomes conducive enough to attract investors from all corners of the globe. Investors are confident enough to bring technology, transfer their skills to local Zimbabweans who benefit from global experience to add value to local resources. This is a Zimbabwe that does not boast of exporting tobacco, chrome and other commodities, but exports products, ultimately filing up the central bank with export proceeds.

We can build a Zimbabwe that takes a lead in Sadc and AU, while setting a trend of friendship with all civilised countries and being a pillar of stability that becomes a magnet for millions of tourists every year. This is a Zimbabwe whose citizens attract global attention for their level of education and hard work; Zimbabweans who even if they are working outside the country, send their money back home to investments that add fuel to the fire of national productivity.

Finally, the MDC wants to build a Zimbabwe that is alert to the need for a clean environment with clean air, obsessed with renewable sources of energy to completely eliminate pollution, deforestation and siltation. Our children can inherit a jewel of a country made by MDC.

The Zimbabwe MDC wants to build

ZIMBABWE - Oftentimes, with a degree of irritating frequency, I have encountered questions in the media asking why we, in the opposition, always mourn about the bad state of Zimbabwe without proffering sustainable alternatives. I am not sure what inspires ...
Share via
x
More Information
x