They murdered my husband — Mujuru 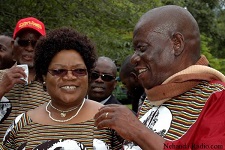 Speaking in an interview with the United Kingdom-domiciled Sunday Times at the weekend, Mujuru said while she was certain that Rex Nhongo (Solomon’s liberation struggle nom de guerre) had been murdered, she did not know who had carried out the evil assignment.

The former VP’s views starkly contrast the findings of a government-appointed coroner who ruled out foul play following a two-week long inquest — after the late general’s charred remains were retrieved from his Beatrice farm, about 60 kilometres south of Harare.

In her interview with the British weekly, Mujuru disputed the official version of the circumstances under which her revered husband died expressed — vowing that the truth about what had happened would eventually come out.

“There was a blue, blue flame, almost one-and-a-half to two metres high, (which is) not normal at all. It seemed to me there was some kind of accelerant,” she said — referring to the inferno that is said to have taken Solomon’s life.

“I can’t say who did it, but they know the people in power. It will come out,” she added.

When she was pressed by the Sunday Times to say whether President Robert Mugabe’s government was involved in Solomon’s death, she declined to proffer an opinion on that.

Speaking after his death, Mugabe was among those who questioned how Solomon had died, taking into account that he was a trained guerrila and distinguished military officer.

Turning to her controversial expulsion from Zanu PF in late 2014, Joice said this had come as a major shock to her — taking a swipe at Mugabe over the nonagenarian’s apparent belief that she had tried to use juju to topple him from power.

“I am a Christian and a member of the Salvation Army. I have never used magic … I said to myself; ‘what a backward man’,” she said.

Speaking in an exclusive interview with the Daily News late last year — as emotions continued to boil over the disputed circumstances surrounding Solomon’s death — his elder brother, Joel, said he had often contemplated suicide because of the “painful” desecration of Rex’s name by Zanu PF leaders, including Mugabe.

The emotional Joel — who also said the Mujuru family was determined to find and nail his brother’s killers after hiring 12 private investigators to look into the matter — said he was struggling to cope with the vicious and relentless attacks on Rex and his beleaguered widow, Joice.

Joel also said although a State inquest had ruled out foul play regarding the late Mujuru’s death, there was widespread suspicion that this was a “professionals hit” by his political foes who were apparently piqued by his influence and kingmaker’s role in Zanu PF, having played a leading role in elevating Mugabe to the leadership of the party in the mid 1970s.

“It is very painful for me that a defenceless man (Rex) is now being subjected to endless attacks, even from the highest office in the land. It is really painful that my brother is demonised every time, regardless of the work he did for this country. Kuzvisungirira kuri nani (it is better for me to commit suicide) as I am the only one left,” he said.

“I’ve been thinking of killing myself because I am in terrible pain. I am not saying the president should stop talking, but I am just asking whether there are no other means to solve whatever problem there is than to attack him daily?

“Kana vachigona kuuraya vanhu vekwaMujuru vese ngavauraye or I will lead the way and kill myself (if they can, they may as well finish off all the Mujurus, otherwise I will make their life easy and take my own life),” he added, choking with emotion.

At the first hearing of Mujuru’s inquest in August 2012, the coroner controversially refused to allow the family’s preferred pathologist, Reggie Perumal of South Africa, to examine the remains of the fallen hero.

The Mujuru family wanted Rex’s body to be exhumed and re-examined, arguing that the State pathologist Gonzales Alvero had done a shoddy job and skipped key processes of the inquest — amid a widespread feeling that the coroner had acted unlawfully and that there had been “behind-the-scenes political interference” in the inquiry.

All this has led the family to make public demands for a second inquest, to examine, among other issues, the exact circumstances that caused the fire that killed Solomon, and whether he was still alive when the fire started.

“If a second inquest is to be ordered, it must be held by a different coroner. The findings of the second inquest will then replace those delivered from the first,” a source close to the Mujuru family told the Daily News.

Stung by the worsening desecration of Rex’s name by Zanu PF bigwigs, Joel said the Mujuru family was now even more determined to hunt down his killers. This came after Mugabe accused the deceased former army commander of having plotted to remove him from power using the likes of MKD leader Simba Makoni and veteran academic Ibbo Mandaza before he died.

The highly-charged Joel, who stammers like his late young brother, and often dropped tears during his interview with the Daily News, said it was “very painful that a defenceless man (Rex) is now being subjected to endless attacks even from the highest office in the land”.

“Asi haatadze kuuya kuzobvunza munhu akamuuraya (He will not fail to confront his killers). Manyangarara ari kuitika mavhirovhiro ekuti zvichabuda pachena chete (All the nonsense that is taking place in Zimbabwe shows that some people are being haunted by his death and the truth will come out).

“This issue will not end until we get to the bottom of it. Why talk about Solomon today? Solomon will confront his killers one day even before the second coming of Jesus Christ. He will ask them, ‘why did you kill me?’ There are 12 people leading the investigations and even if I die today they will carry on. We are going to find who killed Solomon,” Joel said.

Joel also said the Mujuru family was angry and “in a state of confusion” as to what Zanu PF was seeking to achieve through its continued vilification of their departed son.

They murdered my husband — Mujuru